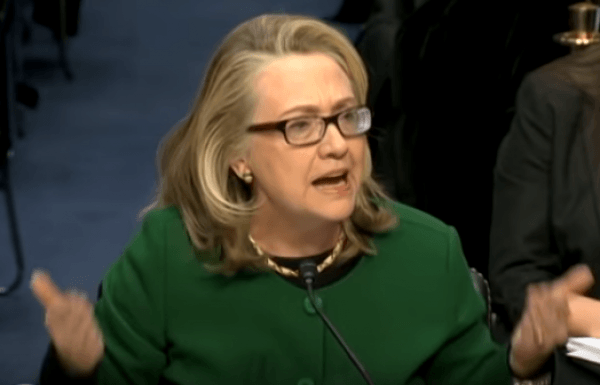 Clinton made her comments on the “Just Something About Her” podcast with host Jennifer Palmieri, who was also Clinton’s former campaign spokesperson.

While the full interview hasn’t yet been released, The Recount provided a snippet of Clinton’s comments.

Palmieri is the author of two books [1] titled “Dear Madam President” and “She Proclaims: Our Declaration of Independence from a Man’s World.”

We talk so much about the right to bear arms in America. @HillaryClinton [2] wants to change the narrative.

What about the rights of everyone else? The right to go to work, to school, or to the grocery store without fear?

Clinton: Democracy Is “Balancing Of Interests And Rights”

Clinton clearly laid out her theory of her governance during the interview, and implied that Republicans are ‘gun worshipers.’

Clinton said during her interview, “You know, democracy is the balancing of interests and rights, and unfortunately at this time, the gun worshipers have a huge advantage because of the filibuster and because of their shameless exploitation of people’s unwarranted fears.”

“The opportunists on the other side, like Cruz and his ilk,” she continued, “they know better and they are in the position of trying to keep people really riled up and scared that sensible gun legislation like we had in the ‘90s for 10 years will somehow undermine their rights.”

Clinton then spoke as if the general public was in constant danger due to Republican opposition to increased gun control.

I'd like to remind Democrats, our Founders had just finished a war against their former countrymen.

Shall not be infringed is pretty clear.

Clinton: ‘What About The Rights Of All The Rest Of Us?’

Clinton believes Republicans have an advantage in the gun-control debate because of the filibuster, which requires a 60-vote threshold to pass some types of major legislation.

The Senate is currently split 50-50 with Vice President Kamala Harris being the potential tiebreaker.

Chuck Schumer laid out the Senate's April legislative priorities, saying that Democrats will attempt to work with Republicans but the caucus would find a way to move forward to matter what. https://t.co/g7ypOApasJ [8] axios

Earlier in March, House Democrats voted to expand criminal background checks to all gun sales and transfers, but Republicans and some Democrats have opposed.

Senate Majority Leader Chuck Schumer said last week [10] he would bring background check legislation to the floor after the Senate returns on April 12.

Now is the time to support and share the sources you trust.
The Political Insider ranks #16 on Feedspot’s [11] “Top 70 Conservative Political Blogs, Websites & Influencers in 2021.”