One month after Gina Carano was fired by Disney from her show “The Mandalorian” amidst backlash over her conservative views, rumors are swirling that Disney has shelved her episode of “Running Wild With Bear Grylls.”

It had been announced on February 11 that Carano would be an upcoming guest on Grylls’ show. 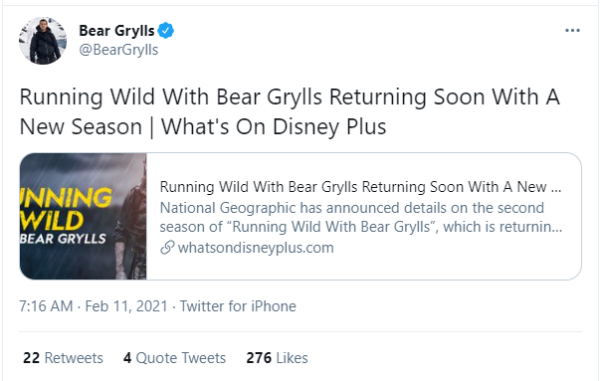 However, TvMaze reported that Carano’s name is not listed on any of the upcoming episode of the show, indicating that Disney has decided not to air it in the wake of her scandal

This will undoubtedly be another disappointment for Carano, who took to Twitter back in January to discuss her excitement at having done the show.

“One of the best experiences of my life & most definitely my 2020 was hanging out with this guy @beargrylls in the Dolomites,” she tweeted.

One of the best experiences of my life & most definitely my 2020 was hanging out with this guy @beargrylls ❤️ in the Dolomites. Definitely faced some fears. 😂 Much love to you Bear! Incredible human being. 🙏 pic.twitter.com/GTSCJQ4h7t

YouTuber Drunk3p0 was one of the first to notice that Carano’s episode was gone, and he made a video about it. You can check that out below.

Disney has spent the past month trying to erase any trace of Carano, who is one of the few Hollywood stars who is unafraid to be open about her conservative views. During a Q&A last week, Walt Disney Co. CEO Bob Chapek was asked if Disney had a “black list” when asked about Carano and her conservative views, according to The Hollywood Reporter.

Chapek responded by saying that he does not see Disney as “left-leaning or right-leaning” and that Disney stands “for values that are universal: Values of respect, values of decency, values of integrity and values of inclusion. And we seek to have the content that we make reflective of the rich diversity of the world we live in. And I think that’s a world we should all live in harmony and peace.”

Carano has said that she is a victim of “cancel culture,” and that she is planning to team up with The Daily Wire, the conservative website run by Ben Shapiro, to develop and produce a movie project.

Project Veritas Confronts Sen. Murkowski Over Secret Support Of Move To Keep Her In Power [VIDEO]

Megyn Kelly Calls The Trump Raid Narrative ‘Bullsh*t,’ Says This Is What It’s Really About [VIDEO]