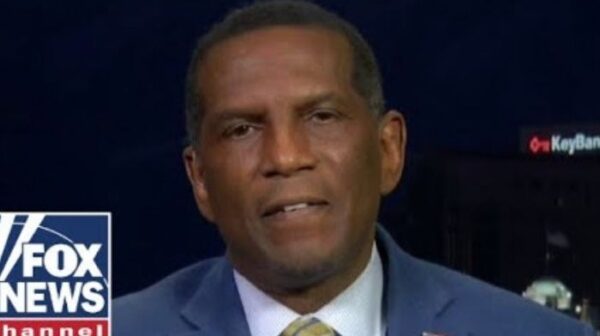 The NFL legend Rep. Burgess Owens (R-UT) went on Fox News on Tuesday night to blast Democrats for radical immigration policies that he says will only hurt the black community. He also explained that policies that will actually improve the lives of middle-class Black Americans are seen as a “threat” to the left.

“Well, what we have to understand is what the real threat to the hard left and growing up in a remarkably successful segregated, but a middle-class family in the 60s and went across our country and turned his attention to the black community, the greatest threat to the left is the middle-class Black American, those who have faith, they have a family, they’re educated, and they believe in a God, and they believe in the free market,” Owens told host Tucker Carlson. “What has happened to my community, and by the way, these — the leftist have never been our friends. They’re the ones that are anti-choice.”

“They are the ones that open borders that they know that is going to end up hurting those that are trying to get that first ladder up to the middle class,” he continued. “They are against anything, any policy that helps us to become independent. And that is what — that’s what the left is trying to do to our country. So I want to be the greatest warning buoy to let you know from a community that was remarkably competitive, the most competitive, and our country during the 60s that is not competitive because of what the left has done.”

“What they’ve done to us is a preview of what they’re trying to do to our country,” the former NFL star added. “So we need to wake up Americans. It doesn’t Democrat, Independent, Republican, it doesn’t matter what party, those who love our nation knows that there’s a — they need to know there’s a leftist ideology that hates everything we stand for, and they’re coming at us big time. We need to pull ourselves together, start communicating and realize that the policies that Biden is putting together right now is all about defeating the dream of Americans to live the American Dream and may get to that middle class.”

Not stopping there, Owens went on to describe the Congressional Black Caucus and other members of the black community supporting the immigration policies as “black elitists.”

“It’s a very, very small minority of those who get to have a chance to have this conversation,” he said. “Only the black elitist, those are the ones that have really done the most damage. Those who live the American dream, the Black Caucus right now that literally live the American Dream until the rest of us, we can’t do it. They’re all about doing anything they can to keep the lowest, those who are trying to get to the middle-class dependent so that the elitist class gets more power.”

“And it doesn’t matter what color they are, Tucker — elitists are the worst threat to our nation, no matter what color and the worst of those who look like me and tell black Americans like myself, we can’t do what other Americans do because whatever — our skin color or whatever their excuse might be,” Owens concluded. “The dream of America is we can overcome all obstacles, and we can make sure we are spreading that news big time.”

Check out the full interview below.