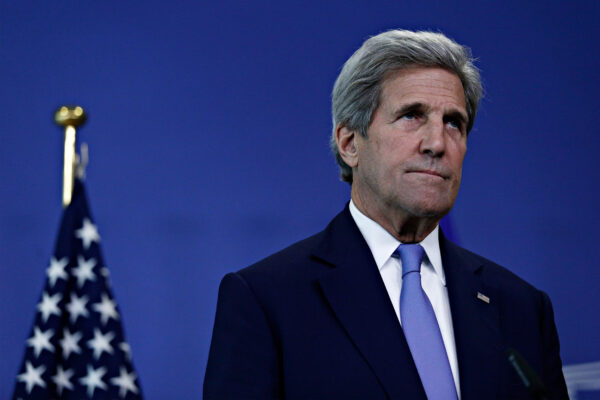 Fox News, who defines the effort as “shadow diplomacy,” explains that they “had meetings with Iranian Foreign Minister Javad Zarif during the Trump administration that were orchestrated to undermine” Trump.

An unnamed former senior U.S. official told the Washington Times that there were face-to-face meetings between Zarif and influential Democrats in 2017, 2018 and 2019.

Kerry and Malley served as key U.S. negotiators of the 2015 Joint Comprehensive Plan of Action (JCPOA) – the Iran nuclear deal.

The deal provided economic sanctions relief and access to tens of billions of dollars in frozen bank accounts to Iran in exchange for a promise to limit nuclear enrichment activities.

Trump pulled the United States from the pact in 2018, but Zarif apparently knew he had a friend in the former Obama officials and a hope that they would again be in power soon.

Zarif met, according to Fox, with “veterans who could return to power ‘to devise a political strategy to undermine the Trump administration’ and usher in softer diplomacy between the U.S. and Iran.”

So this is legal just for Democrats?

Enough with the double standards.

The Washington Times writes that the “shadow diplomacy” conducted by Kerry and other Obama-era officials “was particularly striking because Iran at the time was backing plots to kill Americans stationed in neighboring Iraq.”

They add that the Iranian regime “was funneling money, including funds it received from sanctions relief under the JCPOA, to terrorist organizations Hamas and Hezbollah.”

Obama helped fund terrorism, then his officials conducted rogue negotiations with a nation even as they knew of a plot to kill Americans.

Kerry currently serves as President Biden’s climate czar while Malley has been appointed special envoy for Iran policy at the State Department.

“It is not good practice for senior officials who served at the highest levels of a former administration, Democratic or Republican, to be trying to undermine the policy of a sitting administration by engaging actively with a known enemy of the United States,” Dubowitz said.

“That’s especially true when multiple administrations have determined that this enemy is the leading state sponsor of terrorism.”

Iran has chanted “Death to America! Death to Israel!”

Trump was right to end the JCPOA.

But John Kerry actively worked behind America’s back with Iran “to devise a political strategy to undermine the Trump administration,” through meetings over the past few years.#LoganAct [7] https://t.co/he9MVohP2S [8]

They’ve Admitted to It

John Kerry, in September of 2018, in an interview [11] with radio host Hugh Hewitt, admitted to conducting rogue diplomacy with a top Iranian official, unauthorized by the government at the time.

“I met with him at a conference in Norway,” Kerry said, speaking about Zarif. “I think I saw him in a conference in Munich at the World Economic Forum. So I’ve probably seen him three or four times.”

Imagine Donald Trump being caught negotiating with a top foreign minister for Russia while Biden was serving as President. No doubt he’d be brought up on charges of treason either by actual Democrats or their propaganda firm, the media.

At the very least, John Kerry and Malley’s actions in negotiating with Iran are a violation of the Logan Act which states:

Former President Trump accused Democrat Senator Chris Murphy of trying to circumvent American foreign policy through violation of the Logan Act when he met with Zarif in 2020.

President Trump: “I saw that…Senator Murphy met with the Iranians; is that a fact? I just saw that on the way over. Is there anything that I should know? Because that sounds like to me a violation of the Logan Act.” pic.twitter.com/qOEwDaRptR [15]

Murphy went on to publish a series of tweets that explained he and other unnamed Democrat senators have, in fact, conducted secret meetings with Zarif.

3/ Congress is a co-equal branch to the executive. We set foreign policy too. Many of us have met w Zarif over the years, under Obama and Trump. So though no one in Congress can negotiate with Zarif or carry official U.S. government messages, there is value in having a dialogue.

Former Secretary of State Mike Pompeo at the time made it clear that any congressional meetings with Zarif were not authorized [18] and offered very serious reasons why.

“This guy is designated by the United States,” Pompeo stated. “He’s the foreign minister for a country that shot down an airliner and has yet to turn over the black boxes.”

Important read for those who don’t believe Kerry & Malley held high-level talks w/Zarif when Trump was still in office. Topic of conversation? How to work behind Trump (& the US) to make promises to Iran’s Mullahs to be fulfilled under a Biden presidency https://t.co/KOIrIjqF63 [19]

They were openly cavorting with an enemy to America. How did the Justice Department under Trump let this kind of action slide?

In 2019, Trump pointed out how Democrats are allowed to get away with any violation of the law, accusing his own Justice Department of not having the courage to act.

“You know John Kerry speaks to them [Iran] a lot, and John Kerry tells them not to call. That’s a violation of the Logan Act, and frankly he should be prosecuted on that,” Trump told reporters at the time.

“But my people don’t want to do anything, only the Democrats do that kind of stuff. If it were the opposite way, they’d prosecute him under the Logan Act,” he added.

Democrats do these things consistently because they know they’re going to get away with it … consistently.

Read more at ThePoliticalInsider.com:
U.S. Women’s Soccer Team No Longer Kneels For National Anthem – What Changed? [22]
Nearly 50% Of Trump Voters Say They Will Follow Him To Another Party And Abandon The GOP [23]
Report: Trump Set To Deliver Speech Claiming ‘I’m Still In Charge’ Of GOP [24]