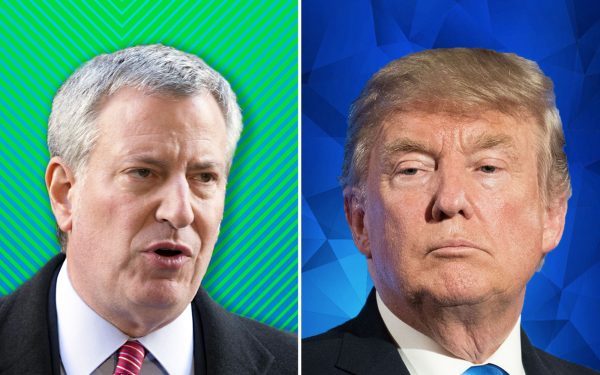 The Trump Organization slammed [1] New York City mayor Bill De Blasio for his “blatant disregard for the facts” after he terminated all contracts with the city.

De Blasio announced Wednesday that three contracts – including one which dates back 30-years – would end due to protests at the Capitol last week.

Long-standing contracts will end [2] for the iconic skating rinks in Central Park, the park carousel, and Ferry Point Golf Course in the Bronx.

“The president incited a rebellion against the United States government that killed five people and threatened to derail the constitutional transfer of power,” de Blasio claimed.

“The City of New York will not be associated with those unforgivable acts in any shape, way, or form, and we are immediately taking steps to terminate all Trump Organization contracts,” he added.

New York City will terminate business contracts with the Trump Organization following the assault on the U.S. Capitol.

De Blasio, who only evades being the dumbest man in politics because he splits votes with the governor in his state, went on to accuse President Trump of being a criminal.

“What’s obvious is that these are sites that we want to continue serving the public, but not with an organization led by a criminal,” he said without evidence.

Trump has never been charged with a crime, despite the left’s best intentions to see it happen.

Therefore, we label the mayor’s statement ‘false’ and urge Twitter to make sure they add a disclaimer to De Blasio’s comments.

On a side note – if De Blasio were truly invested in trying to root out criminal activity in his city, he’d start by figuring out what his wife did with the $850 million [6] in taxpayer money meant for a mental health program she lost.

So they expanded the budget, I kid you not.

“Where has $850m gone? Bill de Blasio’s wife can’t account for staggering amount of taxpayer money that the NY Mayor gave her for mental health project”https://t.co/IkgInj5A0Z [8]

The Trump Organization fired back at De Blasio saying New York City “no legal right to end our contracts.”

They called it “another example of Mayor de Blasio’s blatant disregard for the facts” and noted, “if they elect to proceed, they will owe The Trump Organization over $30 million dollars.”

More importantly, they point out that De Blasio’s actions aren’t about seeking disassociation from ‘criminal’ activity but rather, it is just another example of ‘cancel culture.’

“This is nothing more than political discrimination, an attempt to infringe on the First Amendment and we plan to fight vigorously,” they stated.

Corporations distancing themselves from Trump after the Capitol riot? Interesting….when BLM spent the summer rioting and looting, those same corporations bent over backwards to kiss that organization’s butt.

De Blasio is just one of many extreme leftists engaging in economic and free speech attacks against the President based on the media’s Capitol riots narrative.

Earlier today, YouTube announced [13] that they were suspending his channel “for at least one week, and potentially longer.”

Conservatives jumped ship to other platforms like Parler, only to have Amazon pull the plug [14] on hosting, and many who remained on Twitter were purged by the tens of thousands following allegations they were part of Qanon.

Mainstream media outlets jumped in with CNN calling for [15] networks to first watch events attended by President Trump before determining what they want you to see and hear.

Forbes threatened [19] companies not to hire associates of the President.

“Want to ensure the world’s biggest business media brand approaches you as a potential funnel of disinformation?” they caution. “Then hire away.”

If @JoeBiden [20] really wants to unite the country, he will condemn the out-of-control #cancelculture [21] and Great Purge. https://t.co/Ts7dUAEhXz [22]

Businesses associated with President Trump are being de-platformed.

On Sunday, the PGA announced that the 2022 PGA Championship would no longer be held at Trump Bedminster in New Jersey, a course owned by the Trump organization.

If Joe Biden had an ounce of integrity he would denounce this obvious assault on free speech and the right to life, liberty, and the pursuit of happiness.

We already know De Blasio doesn’t have the integrity to operate within the truth. Perhaps Biden could give it a shot.

This piece originally appeared in ThePoliticalInsider.com [29] and is used by permission.

Read more at ThePoliticalInsider.com:
Biden Declares Economic Relief For Businesses Will Be Based Partly On Gender And Race [30]
Biden Vows To “Defeat” The NRA On Anniversary Of Gabby Giffords Shooting [31]
Nancy Pelosi Accuses Capitol Rioters Of Choosing ‘Their Whiteness’ Over Democracy [32]