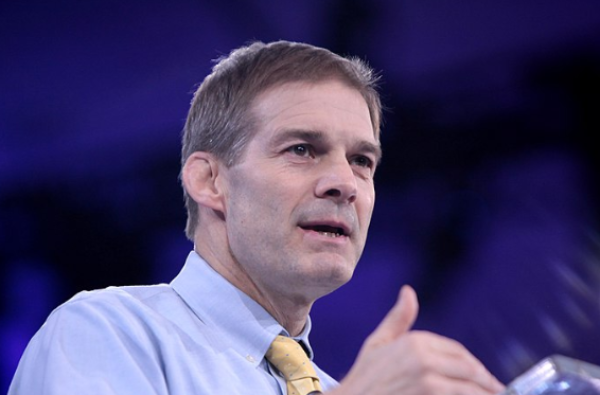 The Hill reports that Jordan received the award “citing his defenses of Trump against impeachment and the Russia investigation.”

In a White House press release [2], President Trump lauded the Republican Congressman for having “led the effort to confront the impeachment witch hunt.”

“He is an inspiration to freedom-loving Americans everywhere and has distinguished himself as one of the most consequential members of Congress of his generation,” the statement concluded.

Rep. Jim Jordan leaves the White House after being awarded the Presidential Medal of Freedom by President Trump in a private ceremony. pic.twitter.com/7yiLRbHPJK [3]

Jim Jordan repeatedly took Democrat Adam Schiff to task during the RussiaGate impeachment inquiry meetings, claiming that the Democrat had a reputation for leaking and lying.

He called Schiff out for claiming outwardly that he had no idea who the famous ‘whistleblower’ was during the impeachment hearings, even though that would be an impossibility.

“This committee will not be used to out the whistleblower,” Schiff claimed at the time.

“You have said you don’t know who the whistleblower is – even though no one believes you,” Jordan shot back at the California Democrat.

Jordan was asking about who was leaking national security information.

Schiff stops him to “protect the whistleblower”

“You have said you don’t know who the whistleblower is – even though no one believes you.”

Another memorable exchange between the pair took place when Jordan tried to finish a question and Schiff claimed he wouldn’t ‘indulge him’ much longer.

“I have indulged you with extra time—” Schiff said.

Jordan replied, “I appreciate it,” as he tried to finish his line of questioning.

“But indulgence is wearing out,” Schiff interjected.

“Our indulgence wore out with you a long time ago, Mr. Chairman, I will tell you that,” fired back Jordan.

Jordan also made a splash during testimony by Dr. Anthony Fauci regarding the coronavirus, lockdowns, and Black Lives Matter protests.

In one particularly heated exchange Jordan asked Fauci, “Should we limit the protesting?”

“I’m not in a position to determine what the government can do in a forceful way,” Fauci responded.

“I haven’t seen people during a church service go out and harm police officers or burn buildings,” Jordan scoffed, noting Fauci had opined on plenty of other events prior to that.

“No limit to protests, but you can’t go to church on Sunday.”

But Democrats encourage people to riot and protest in the streets. pic.twitter.com/78Dyjkt6D6 [8]

Nunes was instrumental in uncovering the deep-seated corruption that took place behind closed doors during the Russia probe.

This piece originally appeared in ThePoliticalInsider.com [10] and is used by permission.

Read more at ThePoliticalInsider.com:
Biden Declares Economic Relief For Businesses Will Be Based Partly On Gender And Race [11]
Biden Vows To “Defeat” The NRA On Anniversary Of Gabby Giffords Shooting [12]
Nancy Pelosi Accuses Capitol Rioters Of Choosing ‘Their Whiteness’ Over Democracy [13]