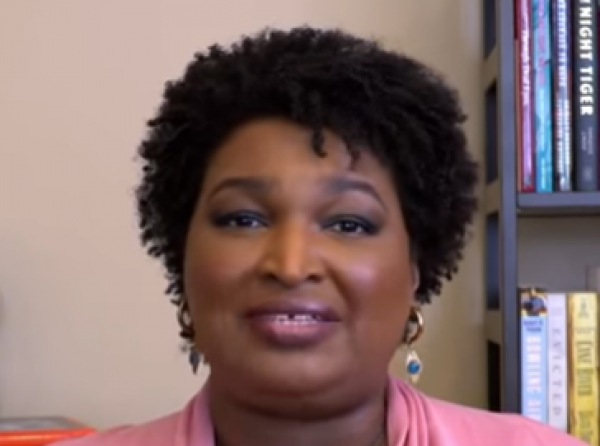 National political correspondent for the New York Times, Jonathan Martin, shared a tweet on Tuesday containing an advertisement that featured Abrams telling voters to “confirm the status of your ballot today.”

He hinted that Abrams is using the ads as a launch point for her second attempt at winning the governorship in Georgia in 2022.

2020 ends and 2022 begins:@staceyabrams [2] has bought TV time in GA to ensure ballots are counted and cured after tonight

Via a media buyer > pic.twitter.com/lErzUwLRyL [3]

Martin tweeted, “2020 ends and 2022 begins: @staceyabrams has bought TV time in GA to ensure ballots are counted and cured after tonight.”
“Via a media buyer,” he added, pointing to the add.
Martin also said via Twitter that Abrams is “still airing spots on black radio.”

“We have the chance to decide the future of the United States Senate,” she says in the ad.

Martin tweeted “And she’s still airing spots on black radio.”
The reference to 2022 marks the belief that Abrams will run for governor again, against Republican Governor Brian Kemp.
Kemp has been under heavy fire from conservatives and President Trump over his handling of the 2020 election.

Abrams’ organization Fair Fight paid for the ad where she encouraged citizens to visit PeachVote.com to check the status of their ballots.

“Don’t wait,” Abrams says in the ad. “Your vote has the power to determine the future of Georgia and our country. It’s time to make certain your voice was heard.”

A federal judge last week blocked Fair Fight’s effort [8] to get a restraining order against election monitoring in Georgia by True The Vote.

The organization challenged the eligibility [9] of 364,000 voters to take part in Tuesday’s runoff elections in which incumbent Republican Sens. David Perdue and Kelly Loeffler sought to keep their seats from Democrat challengers Raphael Warnock and Joe Osoff.

True the Vote also revealed that staff & volunteers are being harassed & threatened by Democrats. This is unacceptable!

Trump Rallied For Republicans Loeffler And Perdue On Monday

True the Vote has made the case that these voters names have appeared on the change-of-address database maintained by the U.S. Postal Service.

Fair Fight contended in a lawsuit True The Vote was engaged in a campaign of “voter suppression and intimidation” through its eligibility challenge.

President Trump said of the Democrat senate candidates and their party during a rally to support Republican in Dalton, Georgia on Monday night, “It will make it really a one-party country and the party will be the wrong party.”

“Fight for Trump!” chants at the first mention of Kelly Loeffler during the President’s speech #TrumpRally [12] #Georgia [13] #Dalton [14] #GeorgiaRally [15] pic.twitter.com/ntsWBHwkGk [16]