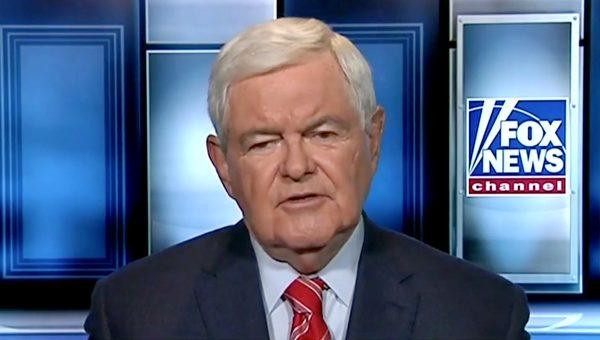 Nancy Pelosi was asked in a recent interview why Democrats insisted on pushing for another impeachment of President Donald Trump, and the House Speaker she acknowledged that her motivation to prevent Trump from running again.

In a recent interview [1] with “60 Minutes,” CBS News reporter Lesley Stahl asked Pelosi if, “after all of this, there’s no punishment, no consequence, and he could run again for president.”

Pelosi admitted, “That’s one of the motivations that people have for advocating for impeachment.”

Former House Speaker Newt Gingrich seized on the comment as the real reason behind the Democrats’ lightning quick attempt to impeach President Trump for a second time.

Gingrich: ‘Pelosi Fears The American People Might Pick Him If They Were Allowed To’

“The will of the American people has to be subordinate to the will of Pelosi,” Gingrich wrote on Twitter.

“Trump has to be impeached to stop him from running again,” Gingrich continued. “Pelosi fears the American people might pick him if they were allowed to.”

“What a formula for expressing Washington’s contempt for the people,” he finished.

They aren’t impeaching Trump again as a punishment. They’re doing it to send a message to anyone else outside the club who might get the idea they can run for president ever again.

The Democrats voted Wednesday on an article of impeachment that charged Trump with inciting citizens to create an insurrection on Capitol Hill.
The House Democrats article of impeachment [5] read, “Incited by President Trump, a mob unlawfully breached the Capitol, injured law enforcement personnel, menaced Members of Congress and the Vice President, interfered with the Joint Session’s solemn constitutional duty to certify the election results, and engaged in violent, deadly, destructive, and seditious acts.”
“He threatened the integrity of the democratic system, interfered with the peaceful transition of power, and imperiled a coordinate branch of government,” it continued. “He thereby betrayed his trust as President, to the manifest injury of the people of the United States.”

Wednesday’s attack on our democracy was intended to scare us away from carrying out our duties as the people’s representatives.

Rasmussen’s Daily Presidential Tracking Poll shows President Trump’s approval stands at 48% [11] as of the Monday after the violence at the Capitol.

Further, pollster Frank Luntz released results Monday that show 91% of Republicans would vote for President Trump if the election were held right now.

Despite their criticism of his conduct since November 3rd and last week, % of Trump voters say they’d still vote for him if another presidential election were held today. pic.twitter.com/Gi4uEwJcVu [12]

The fact remains that President Trump is very popular among Republicans and his supporters, and that support likely isn’t going to go away any time soon.

Read more at ThePoliticalInsider.com:
Biden Declares Economic Relief For Businesses Will Be Based Partly On Gender And Race [15]
Biden Vows To “Defeat” The NRA On Anniversary Of Gabby Giffords Shooting [16]
Nancy Pelosi Accuses Capitol Rioters Of Choosing ‘Their Whiteness’ Over Democracy [17]