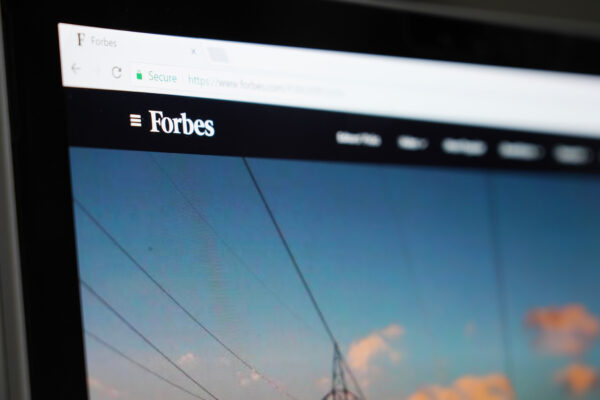 An op-ed by the staff at Forbes threatens [1] companies who plan to hire members of President Trump’s inner circle that they will immediately be dismissed by the magazine as liars.

The column begins with the assertion that the Capitol riots were “rooted in lies” about a “fair election.”

The magazine then mocks Trump associates as “fabulists.”

“Let it be known to the business world: Hire any of Trump’s fellow fabulists above, and Forbes will assume that everything your company or firm talks about is a lie,” the column reads.

Forbes then makes a very explicit threat to report negatively on any company that dares to hire any of the people listed above.

“Want to ensure the world’s biggest business media brand approaches you as a potential funnel of disinformation?” they caution. “Then hire away.”

If @JoeBiden [2] really wants to unite the country, he will condemn the out-of-control #cancelculture [3] and Great Purge. https://t.co/Ts7dUAEhXz [4]

Remarkably, after everything you just read, Forbes makes the claim that their stunt isn’t about “cancel culture” and isn’t “politically motivated.”

“This is just the latest example of cancel culture and the great purge that we’re seeing come from the left and never-Trump Republicans,” she said in a segment with Fox & Friends.

Forbes is most certainly a never-Trump gang, essentially making them the Lincoln Project of media outlets.

Bolar continued: “This dangerous cancel culture, which wants to ban any American who had the audacity to support President Trump or work in his administration from being able to do something as basic as have a new job.”

In a social media [5] post, Bolar asserted that “if [President-elect Biden] really wants to unite the country, he will condemn the out-of-control [cancel culture] and Great Purge.”

The chief content officer of @forbes [7] warns any company that hires “Trump’s fabulists” — naming Conway, McInaney, Spicer, Grisham, etc. — they will “assume that everything your company or firm talks about is a lie.”

Forbes is just another run-of-the-mill media entity motivated by cowardice, calling for the mass purge of Trump supporters either from social media, media, or in this case, from employment, all while whimpering as Democrats threaten them if they don’t do their bidding.

How do we know they’re threats are motivated in bias?

They mention Clinton press secretary Joe Lockhart, a frequent liar on social media, a man who once completely fabricated [13] a “conversation” between Republican Senators only to call it satire once he was caught lying, as someone who has maintained their credibility.

Leave the satire to us; we’ll leave the fake news to you.

They say the same of Obama lackey, Jay Carney, a man who was once labeled in a Washington Post column [15] as part of “Obama’s blizzard of lies,” and helped Barack spread his lie [16] about Benghazi.

Carney and Lockhart “left the White House with their reputations in various stages of intact, made millions taking their skills — and credibility — to corporate America,” Forbes claims.

And Forbes doesn’t merit being taken seriously in the future.

Read more at ThePoliticalInsider.com:
Biden Declares Economic Relief For Businesses Will Be Based Partly On Gender And Race [18]
Melania Trump Condemns Capitol Violence – Leftist Media Pounces On First Lady’s Response [19]
James Clyburn Admits House Democrats May Not Send Articles Of Impeachment To Senate Until After Biden’s First 100 Days In Office [20]