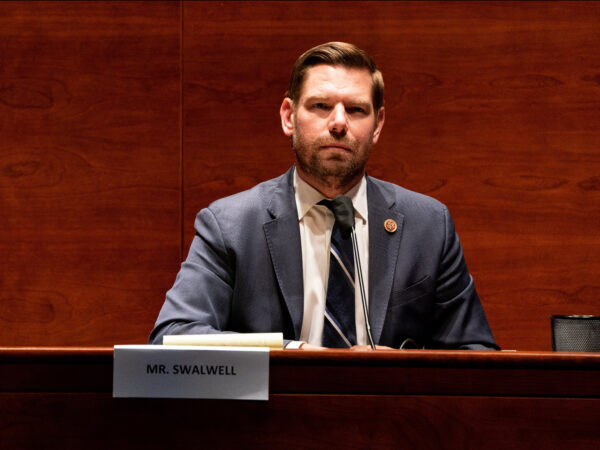 Swalwell’s inclusion is a bit of a surprise, having been named in a report last month indicating he had been the target of a Chinese spy.

“Congressman Swalwell serves on House Permanent Select Committee on Intelligence, where he chairs the Intelligence Modernization and Readiness Subcommittee, and on the Judiciary Committee,” a press release from the Speaker’s office reads.

“He is a former prosecutor and is the son and brother of law enforcement officers.  He is serving his fifth term in Congress.”

Swalwell has never been a serious member of Congress, let alone somebody who should be placed in positions of power.

His latest rants [1] calling Republican senators objecting to the election results as being members of the “Coup Klux Klan” and falsely alleging they were fraternizing with “terrorists” is yet another example.

WATCH: I joined @foxandfriends [2] this morning to talk about the Democrats’ shameful snap impeachment, why Nancy Pelosi named the “compromised by the Chinese Communist Party” Eric Swalwell as an Impeachment Manager, and the future of the Republican Party. pic.twitter.com/glQ7to2XKb [3]

Pelosi naming Eric Swalwell as an impeachment manager seems to be a nod that she supports the embattled Democrat congressman despite his alleged connections to a Chinese spy.

A bombshell Axios report [6] last month indicated that a woman by the name of Christine Fang “took part in fundraising activity for Swalwell’s 2014 re-election campaign” and that she interacted with the Congressman “at multiple events over the course of several years.”

Fang had served as a Chinese Intelligence operative with China’s Ministry of State Security.

The FBI warned Swalwell about Fang in 2015 during his first year on the House intelligence committee.

Fox News host Tucker Carlson added to the scandal [7] by alleging during a broadcast that “U.S. intelligence officials believe that Fang had a sexual relationship with” Swalwell.

The Democrat refused to comment on the matter, citing such information as being possibly classified.

Tucker Carlson says that “U.S. Intelligence officials believe” that a suspected Chinese spy “had a sexual relationship with” Democrat Rep. Eric Swalwell (CA) and that Swalwell’s office couldn’t comment on it because they said that info might be “classified”pic.twitter.com/biV78uVZHB [8]

House Minority Leader Kevin McCarthy (R-CA) immediately called for Swalwell’s removal from Congress following the reports, while others insisted he should have been removed by the House Intelligence Committee long ago.

Pelosi defended [10] her colleague, saying she didn’t have “any concern” about him.

Swalwell, thus far, has not been accused of any wrongdoing by any intelligence officials.

.@repswalwell [11]: “The most unsettling part of all of this is that they were able to get so close and we had to retreat from America’s floor of democracy.” pic.twitter.com/KxT9hElWrm [12]

Rep. Jamie Raskin (D-MD) will serve as the lead impeachment manager. Raskin, of course, plotted Trump’s impeachment before he stepped foot in the White House.

In fact, prior to President Trump’s inauguration day, the lead manager had impeachment on the brain [15].

“I just know that if I’m going to vote to impeach the man at some point, I would like to be able to look him in the eye on Inauguration Day,” he said when asked if he planned on attending the event.

Demonstrating just how unserious this impeachment team is, Raskin objected to certification of Florida’s electoral votes in 2017.

Yes, the same reason Democrats are screaming that Trump must be impeached, that Republicans must be expelled from Congress, that conservatives must be purged from social media – objecting to electoral votes – is exactly what Raskin did just three years ago.

Rep. Jamie Raskin of Maryland rose to object to 10 of Florida’s 29 electoral votes.

Again, despite the fact that Raskin pointed out that he had his objection in writing, he failed to get a senator’s signature.

In fact, House Democrats tried objecting to the certification of electoral votes for Donald Trump 11 separate times. Why were there no calls for their expulsion?

This piece originally appeared in ThePoliticalInsider.com [19] and is used by permission.

Read more at ThePoliticalInsider.com:
Biden Declares Economic Relief For Businesses Will Be Based Partly On Gender And Race [20]
Biden Vows To “Defeat” The NRA On Anniversary Of Gabby Giffords Shooting [21]
Nancy Pelosi Accuses Capitol Rioters Of Choosing ‘Their Whiteness’ Over Democracy [22]