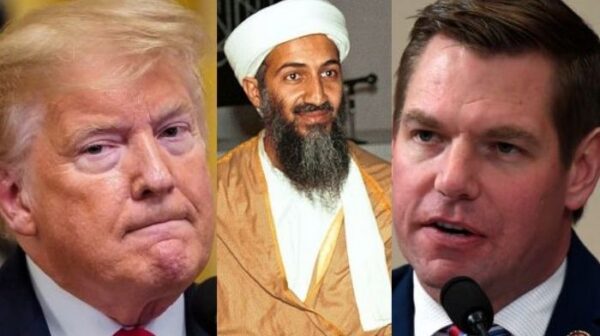 Rep. Eric Swalwell (D-CA), who has had his own fair share of problems lately in the wake of the scandal involving him allegedly associating with a suspected Chinese spy, spoke out on Tuesday night to compare President Donald Trump to the late 9/11 terrorist mastermind Osama bin Laden.

“Well, Osama bin Laden did not enter US soil on September 11, but it was widely acknowledged that he was responsible for inspiring the attack on our country,” Swalwell said on “PBS NewsHour.”

“And the president, with his words — using the word ‘fight,’ with the speakers that he assembled that day, who called for trial by combat and said we have to take names and kick ass — that is hate speech that inspired and radicalized people to storm the Capitol,” he continued.

A visibly surprised host Judy Woodruff asked of Swalwell was really comparing Trump to bin Laden, at which time the Democrat doubled down.

“I’m comparing the words of a [sic] individual who would incite and radicalize somebody, as Osama bin Laden did, to what President Trump did,” Swalwell said. “You don’t actually have to commit the violence yourself, but if you call others to violence, that itself is a crime.”

Rep. Eric Swalwell compares President Trump to Osama bin Laden saying that he "inspired and radicalized people to storm the Capitol" in the same way that bin Laden inspired 9-11 pic.twitter.com/pYr3l4qhMw [1]

This comes one month after seventeen Republicans sent a letter [3] to Speaker of the House Nancy Pelosi (D-CA) demanding that Swalwell be immediately removed from the House Intelligence Committee after his relationship with a suspected Chinese spy was revealed.

“We write to you today out of concern with Congressman Eric Swalwell’s reported, close contacts with a Chinese Communist Party spy recently reported by Axios. Because of Rep. Swalwell’s position on the House Permanent Select Committee on Intelligence, his close interactions with Chinese intelligence services, however unintentional they may be, are an unacceptable national security risk,” they said in the letter.

“HPSCI handles some of the most sensitive information our government possesses — information critical to our national defense,” they added. “As such, we urge you to immediately remove Rep. Swalwell from his position on the House Intelligence Committee.”

Not only did Pelosi not remove Swalwell from the intelligence committee, she has also just made him one of her impeachment managers in her effort to remove President Donald Trump from office.