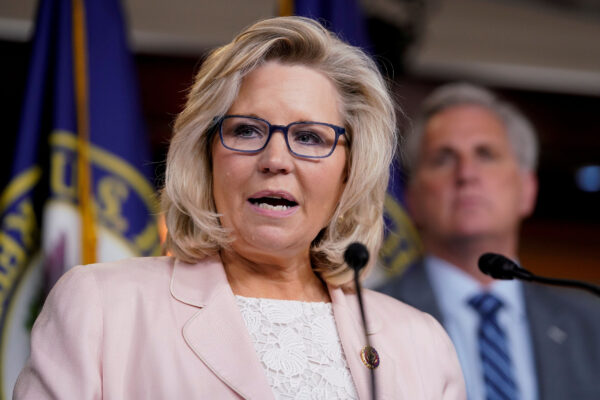 A growing number of GOP lawmakers are calling on Rep. Liz Cheney (R-WY) to resign [1] from her leadership post following a statement indicating she would vote to impeach President Trump.

Cheney, the House GOP Conference chairwoman, came out as the No. 3 Republican Representative to say she would vote in favor of impeachment.

“The President of the United States summoned this mob, assembled the mob, and lit the flame of this attack,” Cheney said in a statement.

“Everything that followed was his doing. None of this would have happened without the President.”

Cheney added, “The President could have immediately and forcefully intervened to stop the violence. He did not.”

“There has never been a greater betrayal by a President of the United States of his office and his oath to the Constitution,” she concluded in some of the harshest rhetoric yet seen by a Republican lawmaker.

Calls Mount For Liz Cheney to Resign After Impeachment Statement

Showing a divide in the Republican party over the impeachment issue, some lawmakers called on [1] Liz Cheney to resign from her leadership post after the comments.

“I don’t think she should be the chair of the Republican conference anymore,” Rep. Andy Biggs (R-AZ), the head of the House Freedom Caucus, told Fox News.

Rep. Andy Biggs calls on Liz Cheney to resign from Republican leadership post over her support for impeaching Trump. – Via @KerryPicket [5]

“When Representative Cheney came out for impeachment today, she failed to consult with the Conference, failed to abide by the spirit of the rules of the Republican Conference, and ignored the preferences of Republican voters,” Rosendale said in a statement.

“She is weakening our conference at a key moment for personal political gain and is unfit to lead. She must step down as Conference Chair.”

Rep. Matt Gaetz (R-FL) called for Cheney’s resignation over the summer, suggesting she had been working behind the scenes to squash the President’s agenda.

“Liz Cheney has worked behind the scenes (and now in public) against @realDonaldTrump and his agenda,” Gaetz tweeted [10]. “House Republicans deserve better as our Conference Chair. Liz Cheney should step down or be removed.”

GOP Rep Liz Cheney laughs off GOP Rep @mattgaetz [11]‘s demand yesterday that she resign. The two had an unusually harsh confrontation yesterday when other Republicans accused Cheney of not being loyal enough to Donald Trump.

President Trump referred to Cheney and Senator Tom Cotton (R-AR) as part of a “surrender caucus” after both went on record to state they would not object [15] to the electoral vote count.

Trump has long portrayed her as a war hawk in opposition to his administration because he refuses to engage in “endless wars.”

“Liz Cheney is only upset because I have been actively getting our great and beautiful Country out of the ridiculous and costly Endless Wars,” Trump tweeted amidst Gaetz’s calls for her to step down.

“I am also making our so-called allies pay tens of billions of dollars in delinquent military costs,” he added. “They must, at least, treat us fairly!”

Members of the conservatives House Freedom Caucus tore into Rep. Liz Cheney (R-Wyo.) during a heated GOP conference meeting, lobbing attacks at her for breaking with Trump, supporting Dr. Fauci and backing a primary opponent to one of their colleagues https://t.co/Y3NdkPLknF [16]

Biggs, according to Fox News [1], said if Cheney weren’t as high-ranking a Republican on the Conference her comments would likely be dismissed.

But her leadership role is why she must step down.

Read more at ThePoliticalInsider.com:
Biden Declares Economic Relief For Businesses Will Be Based Partly On Gender And Race [19]
Biden Vows To “Defeat” The NRA On Anniversary Of Gabby Giffords Shooting [20]
Nancy Pelosi Accuses Capitol Rioters Of Choosing ‘Their Whiteness’ Over Democracy [21]