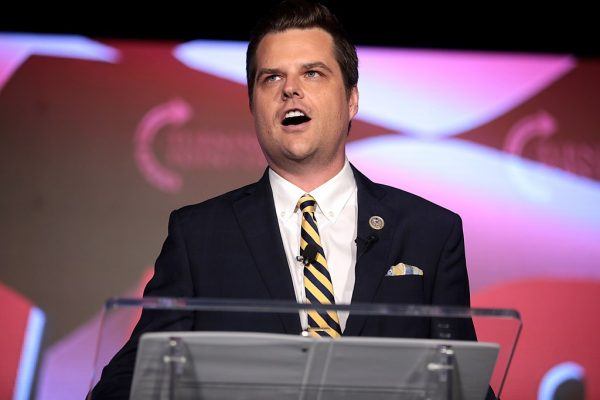 Republican Congressman Matt Gaetz said Monday that the election was an “overwhelming landslide [1]” among in-person voters.

When it comes to the people who actually had to show up in person and vote, this election was a landslide for President @realDonaldTrump [2]. pic.twitter.com/ZdNhYuYGmw [3]

“What Was So Deeply Compelling About Joe Biden’s Message?”

On Fox News Channel’s “The Next Revolution,” Gaetz said, “I think you should extend information invitation to the inner-city African-American voters were uninspired by Barack Obama but then who leapt to the polls to vote for Joe Biden and to come on the show because I would, I like the president, want to meet these people.”

“I want to understand what was so deeply compelling about Joe Biden’s message because we didn’t really hear much of one at all,” Gaetz said.

The Republican Congressman from Florida then noted that in terms of in-person voters, Trump won in an “overwhelming landslide.”

Gaetz said, “What we know is Donald Trump won an overwhelming landslide of the people who showed up and voted in person, whether that was on Election Day or during early voting.”

Joe Biden received 80 million in the popular vote in this presidential election.

RELATED: Pennsylvania Lt. Governor Says Trump Will Get ‘Clock Cleaned’ If He Goes To Supreme Court To Approve Ruling [8]

Gaetz: ‘I Think There’s A Lesson Here For Republicans To Learn’

Gaetz continued, “And then the farther the voter got away from the authentication process, the later the votes were counted, the better Joe Biden did with those voters.”

“I think there’s a lesson here for Republicans to learn,” the Republican opined.

“If we allow the voting process to be separated from identification, authentication, audit and review, then we’re asking for these types of outcomes because when it comes to the people who have to show up in person and vote, this was a landslide for Donald Trump and everybody knows it,” Gaetz said.

“No one seriously even questions that,” he emphasized.

Whether they question that or not is unknown.

That this election had a turnout of epic proportions is fact.

Gaetz is right: It was unlike anything seen in modern American political history.

This piece originally appeared in ThePoliticalInsider.com [9] and is used by permission.