This is a story that could blow up for the congressman nicknamed "Hindenburg" on Capitol Hill.

The California Democrat Congressman and failed presidential candidate nicknamed “Hindenburg” on Capitol Hill (because both have been notoriously full of gas), Rep. Eric Swalwell could have been caught in a Chinese Intelligence “honeytrap.” A honeytrap is an intelligence operation where a female spy sleeps with a target to extract classified information or influence those in power.

Eric Swalwell (D-China) spent years droning on about the fake Russia hoax as he was compromised by China.

Something has always smelled funny with Eric Swalwell.

The method has a history in the US, as various politicians, including a young John F. Kennedy when he was a naval intelligence officer, have fallen into the snare of a seductive foreign agent. Yes, I know this sounds like a trashy spy novel. But it happens. In the stranger than fiction department, the spy who perhaps “loved” Swalwell is named…Fang.

Also, it seems her parents may have suffered from hiccups, as she is also known as “Fang Fang.” They are pictured together below. 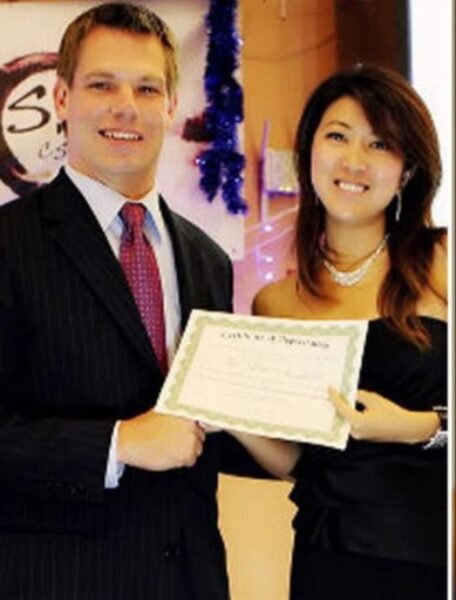 New York Post: “Rep. Eric Swalwell (D-Calif.) is refusing to say if he had sex with an accused Chinese spy who cozied up to a slew of US elected officials, including him, in a bid to infiltrate the US political system. The 40-year-old congressman was among a group of Bay Area Democrats targeted by the honeytrap — also known as Christine Fang — who entered the US as a college student in 2011 and spent the next four years wooing the lawmakers to get close to sensitive government intelligence, according to a report in Axios. Swalwell, a member of the House Intelligence Committee, has cooperated with federal investigations into Fang, according to his spokesperson…Swalwell, in an interview with Politico, also sidestepped the question about how intimate he was with Fang, who intelligence officials said had sex with at least two Midwestern mayors as she tried to get information from them.

MORE NEWS: AOC Claims She Was Not Safe In Secure Location With House Republicans That Sympathize With The ‘White Supremacist Cause’

“But while Swalwell said he has cut off all contacts with Fang, his father, Eric, and brother, Joshua, still have her listed as a friend on their Facebook pages.”

Swalwell’s office stonewalled the accusation. “Rep. Swalwell, long ago, provided information about this person — whom he met more than eight years ago, and whom he hasn’t seen in nearly six years — to the FBI,” Swalwell’s office told Axios. “To protect information that might be classified, he will not participate in your story.” Uh huh. Right  To protect information. He should have thought about that before he met…Fang.

Donald Trump, Jr. got into the fray. “We shouldn’t be surprised that the media being silent on this issue which is truly a national security threat while this man sits on the House Intelligence Committee,” the president’s son told Tucker Carlson.

Swalwell kvetched incessantly about President Trump’s supposed ties to Russia during the 2016 presidential campaign. Those charges were found to be completely unfounded.

“I appreciate you calling out Eric Swalwell, as I was somebody who was probably the number two recipient of these tinfoil hat brigade attacks about Russia for years,” Trump, Jr. told Carlson​.

“I​ find it very ironic that he was perhaps sleeping with a Chinese spy, certainly one that had infiltrated his inner circle​.” Oh, the humanity!

Masters of Projection and Deception. Democrats Don’t Want to Govern Us; They Want to Crush Us and Then Rule Us.