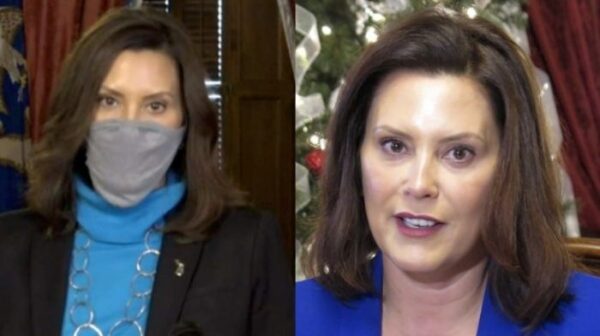 As we move into the holiday season, Michigan’s Democratic Governor Gretchen Whitmer is effectively trying to “cancel” Christmas as she urges her state’s residents not to travel this month.

“We all know the next two months are going to be hard. Too many people traveled for Thanksgiving,” she said on Tuesday in a press conference [1]. “And we will see our numbers increase, very likely, because of it. And that will coincide with the next big holiday, Christmas. Too many people are considering traveling and I’m reiterating: please don’t.”

This comes after the Michigan Department of Health and Human Services put in place a three-week “pause” just before Thanksgiving that limited in-person gatherings to between two households, closed dine-in service at restaurants, and stopped sports and in-person instruction for high school students.

These restrictions are scheduled to be in place until December 8, and Whitmer would not rule out extending it when asked.

“At this point in time, it’s really too early to say precisely where we will be in a few days, much less next week,” Whitmer said [2]. “But I think it’s important for people to know, we’ve not predetermined anything.”

“I would anticipate early next week we’ll have a much better idea of what this pause has meant (and) if people have taken it seriously and done their part,” she continued. “If everyone does their part, we’ll see these numbers drop.”

Michigan Chief Medical Executive Dr. Joneigh Khaldun said experts are “cautiously optimistic” about the latest data, saying that more people have been wearing masks and adhering to other guidelines in the state. While the test positivity rate has gone down, Khaldun added that she is worried about a potential spike from the Thanksgiving holiday.

“That is one thing that I am very concerned about, is that people may have gathered or traveled over the Thanksgiving break,” she said. “Any increases in cases from the Thanksgiving holiday we would not expect to see for two to three weeks in our data.”

Khaldun went on to say that anyone who did travel for Thanksgiving should isolate for fourteen days.