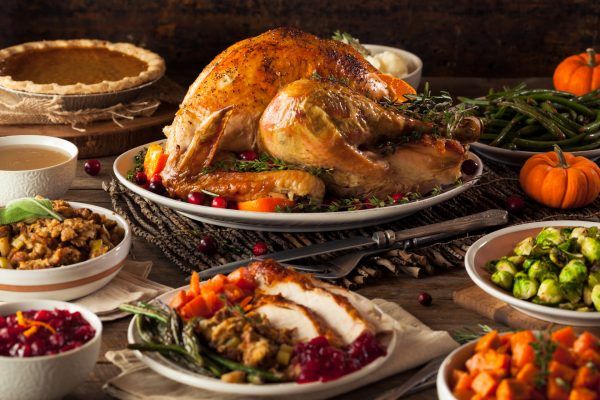 The war on Thanksgiving has been derided as a conservative conspiracy by the leftist press, yet there are many examples of it taking place.

As Americans bask in the afterglow of righteous Thanksgiving feasts with friends and family, let’s look at the evidence.

As the festive season approaches, you can be sure that you’ll start to see reasons why Christmas is actually bad, or bigoted, or something, cropping up all over the press.

The “War on Christmas [1]” is a phenomenon that conservatives have noted for the past two decades, at least.

However, liberals will declare that while yes, they want you to say “Happy Holidays” instead of “Merry Christmas,” the season isn’t being erased at all, and you’re just a crazy nutjob!

What you may not have noticed, is that a war on Thanksgiving is taking place as well.

“As we gather for Thanksgiving, you know, some people want to change the name Thanksgiving. They don’t want to use the term Thanksgiving,” President Trump said last year.

“People have different ideas why it shouldn’t be called Thanksgiving, but everybody in this room, I know, loves the name Thanksgiving. And we’re not changing,” he later continued.

Liberal media outlets like Vox want to tell you that this isn’t happening. President Trump has completely “made up” this war, they say.

But take a look at this incredible declaration by YouTube, which is owned by Google – one of the largest companies on the planet:

For Indigenous and Native Americans, the fourth Thursday of November is dedicated to Indigenous history, activism, and resistance. It’s called Unthanksgiving. pic.twitter.com/SS9PGRiUmK [2]

In fact, in the exact same article they claimed this isn’t happening, [4] Vox argued that “it’s not a bad idea to give thanksgiving a think,” saying that the holiday is “painful for Native Americans,” because of the alleged “genocide” that took place in this country.

You can find countless articles decrying Thanksgiving in this same manner.

The Independent says that Thanksgiving “is considered by some to be a national day of mourning,” [5] while The Atlantic dedicated thousands of words to attacking it as “a celebration of inequality.” [6]

“It’s not clear whether this protest is what Trump was referencing, but if it was, it’s hardly a leftist effort to rename a holiday,” reads the Vox article.

“Rather, it’s an effort to highlight the country’s history from an underrepresented perspective.”

In fact, Thanksgiving is even more directly under attack this year, with Democrat Governors across the country, such as Oregon’s Kate Brown, declaring that people should “rethink” how they celebrate the holiday [7] during the coronavirus pandemic.

Waging a war on Thanksgiving is like Dr Seuss level villainy

RELATED: CO Lawmaker: Nobody Has Authority To Impose Restrictions On Thanksgiving In Your Own Home [9]

This double think isn’t just seen during the festive season, but all year round.

Liberals will tell you on the one hand that they love the Second Amendment, and respect your right to bear arms, and that your guns won’t be taken away, then turn around and say “yes, we’re coming for your AR-15.” [10]

Liberals will tell you that mass migration is a myth, and that the numbers are nowhere near what the right claims, and then tell you that actually, it is happening, and it’s a good thing, and America needs to be so more diverse than it already is.

The question is, how many of them know what they’re doing? I think it’s entirely possible that most normal liberals are engaging in total double-think.

Like the citizens in 1984, they are brainwashed into holding two different and opposing viewpoints simultaneously.

But the ones at the top, in the mainstream media and the Democratic Party, know exactly what they’re doing.

They’ve been doing this for decades, constantly lying to shift the Overton Window further and further away from normality, where reasonable thoughts become bigoted.

If you’re not having a virtual Thanksgiving this year, and sitting down with liberal family members, just watch out for this doublethink the next time you’re having a debate with them. It will probably happen more often than you think!

Read more at ThePoliticalInsider.com:
Biden: I Will Immediately Push To Grant Citizenship To 11 Million Illegal Immigrants [12]
Barack Obama Blasts Hispanics Who Voted For Trump – They Ignored The President’s Racism Because They Oppose Gay Marriage [13]
Far-Left Democrat Barbara Lee Says ‘It Would Be An Honor’ To Replace Kamala Harris In Senate [14]