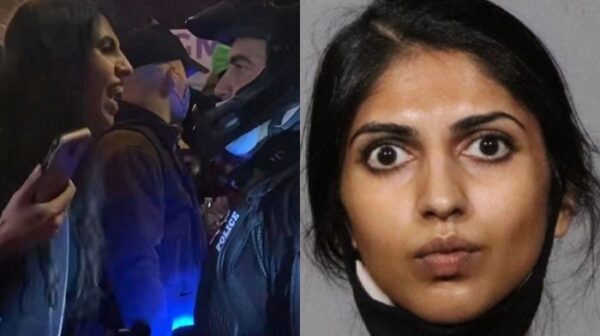 An anti-police rioter just learned the hard way that messing with a cop is never a good idea after she spit in an NYPD sergeant’s face and was immediately arrested.

Devina Singh, 24, was caught on camera screaming in the face of the sergeant, yelling “F— you, fascist!” before allegedly spitting right in his face, according to the New York Post [1].

We must warn you that the video below contains explicit language.

A young woman was arrested after she spat in an officer’s face after screaming, “F–k you, fascist,” tonight in the West Village. pic.twitter.com/cfgVLYJ5pc [2]

Singh, who is from Schwenksville, Pennsylvania, was part of a mob of radical anti-cop leftists who were clashing with police in the West Village of New York City on Wednesday night. Officers said that the mob did things like light garbage on fire and scream at diners outdoors.

Sixty people were arrested, including Singh, who was charged with obstruction of governmental administration, violation of local law and harassment. This is far from the first time that Singh has found herself in trouble with the law. Police say she was hit with resisting arrest charges at a New York City protest in September and unlawful assembly during a protest in Brooklyn last month.

On her Instagram page, which has since been deleted, Singh proudly posted a photo of her September arrest, captioning it, “im so f—— mad … probs bc behind me (white shirt) is Deputy Inspector Elias J. Nikas AKA Little Dick Nik.”

The NYPD has condemned Singh for spitting on the officer.

“Actions like this will not be tolerated. Agitators who commit these acts will be arrested,” the NYPD tweeted [4].

NYPD detectives union the Detectives’ Endowment Association [5] spoke out as well to say, “This despicable behavior won’t be tolerated! This after setting fires & destroying property. We know law abiding NYers don’t want their cops treated like this. Now we need every elected official to publicly condemn it.”

Anti-police sentiments have been at an all-time high in the United States over the past few months, with liberals tolerating this sort of behavior in cities that are run by Democrats. Police officers put their lives on the line every day to protect the rest of us, and they deserve better.