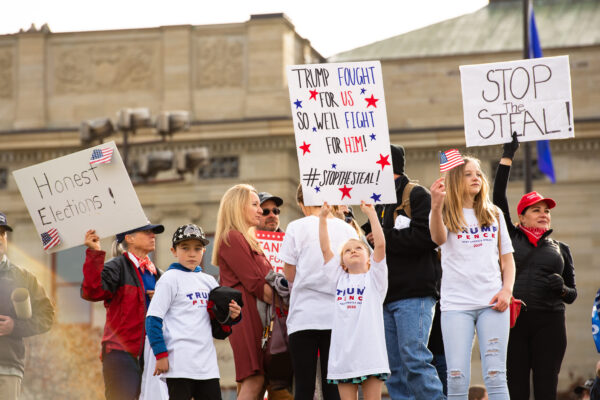 It wasn’t more than a handful of days ago that we broke the news that there had been voter fraud confirmed in California. The media continues to turn a blind eye to the fact that the Democrats are trying to steal the 2020 election not from the Republicans but from the American people. So, when the media doesn’t want to report on the facts, we find it necessary to report on them for you. In the most recent turn of events in the 2020 election, there was evidence of Ballot Dumping in states like Wisconsin and Michigan.

Not scared to take on both the media and entire government, President Trump took to Twitter to show evidence that ballot dumping was taking place in key states like Michigan and Wisconsin. According to the President, Joe Biden and his team were losing badly in the late hours of the night. That is when a huge number of ballots came in for none other than Joe Biden. Take a look at the tweet for yourself.

Look at this in Wisconsin! A day AFTER the election, Biden receives a dump of 143,379 votes at 3:42AM, when they learned he was losing badly. This is unbelievable! pic.twitter.com/nhiLMmyHBn [1]

It would have been interesting if the ballots were split between the candidates and the fact that they came in after the deadline means they should be invalid, but then again – every vote should be counted. That is what the media and the Democrats are crying about. But what about the 143,379 votes that mysteriously came in at 4 am all for Joe Biden? And let’s not forget that most of the ballots were Biden-only.

For those that don’t know, a Biden-only vote or Trump-only vote means that the person that cast the ballot only voted on the president. While this isn’t uncommon to see a voter do this, you rarely see it in such high quantities. In Georgia, they found a little over 800 Trump-only ballots, but in the same state Biden had over 95,000.

Again, we are not blaming the media for election fraud, but they are playing their part by not showcasing the meddling taking place. With so many Biden-only ballots and the Dominion software behind the voting machine, it sad to say but it appears the American people have been lied to and the so-called fair election was in fact stolen right in front of us.

This piece was written by Jeremy Porter on November 20, 2020. It originally appeared in DrewBerquist.com [3] and is used by permission.