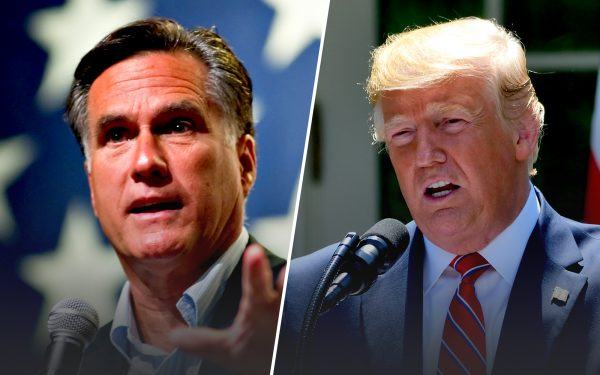 President Trump took to social media and slammed [1] Mitt Romney as a “RINO” after the Utah Senator called his attempts to contest the election “undemocratic.”

RINO = Republican in Name Only.

Trump, in sharing the story [5], took a jab at Romney’s unwillingness to address claims of voter fraud.

“RINO Mitt Romney should read this,” he wrote. “I’m sure, however, that he feels he got slaughter(ed) by Obama fair and square.”

RINO Mitt Romney should read this. I’m sure, however, that he feels he got slaughtering by Obama “fair and square”. https://t.co/GGZKfSAp8z [6]

RELATED: Poll Shows Over Half of Republicans Believe The Election Was ‘Rigged’ And Trump ‘Rightfully Won’ [8]

Trump’s ire was raised by a late-night message to social media posted by Romney, attacking the President for daring to litigate the election.

“Having failed to make even a plausible case of widespread fraud or conspiracy before any court of law, the President has now resorted to overt pressure on state and local officials to subvert the will of the people and overturn the election,” Romney said.

“It is difficult to imagine a worse, more undemocratic action by a sitting American President.”

Huh. It’s fairly easy to think of at least one thing, actually.

Where is Romney’s scathing rebuke of Barack Obama’s undemocratic attempts to subvert the will of the people in 2016 by creating a false Russia collusion narrative [11] and spying on Trump’s transition team?

Save us the pearl-clutching, Mitt.

Oh yes there is, Mitt. The 2016 transition. You might recall the Russia collusion claim, genius. Where the hell have you been?https://t.co/5gj2Sr4iUq [12]

Romney is a Disgrace to the Republican Party

Not content with settling on the RINO remarks, President Trump shared another insult for Romney on Twitter.

He retweeted a message which read, “Romney has lost his mind since 2016.”

Someone should explain to @MittRomney [15] that when he criticizes President Trump, he does not put pressure on him to do anything. In fact, he gives Trump cover with GOP voters to do whatever Romney doesn’t like.

Earlier this year, Romney took part in a Black Lives Matter march to the White House, drawing more ridicule from the President.

“Tremendous sincerity, what a guy,” the President scoffed [17]. “Hard to believe, with this kind of political talent, his numbers would ‘tank’ so badly in Utah!”

Tremendous sincerity, what a guy. Hard to believe, with this kind of political talent, his numbers would “tank” so badly in Utah! https://t.co/KqHsHmSRKo [18]

The Politicial Insider contributing author Chris Barron [20] writes that the only way to rid the Republican party of establishment RINOs like Romney “is for President Trump to immediately declare his intention to run for the Republican nomination in 2024.”

One has to wonder if Romney would find that to be an “undemocratic” thing to do as well.