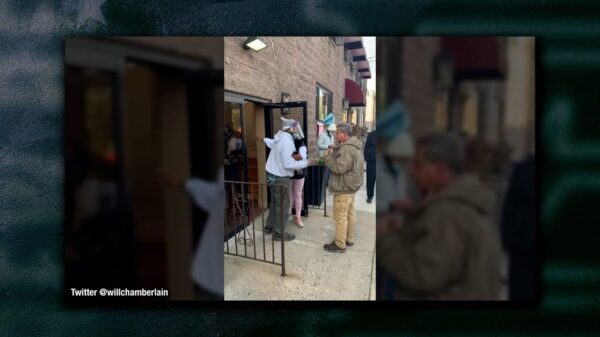 The Election is officially underway and with that – the Democrats are out in full force, trying to steal the election for their candidate Joe Biden. With just a couple more hours to cast your vote, chaos has already erupted throughout America as poll watchers have been denied entrance to polling places and there have even been reports of illegal campaigning outside of the polling locations.

As you can see in the video below, a poll watcher in Philadelphia is denied entrance to a polling location. While some would claim this was due to not meeting COVID-19 regulations, it is easy to see that the poll watcher is wearing all the necessary gear to enter, yet the Democrats remain to hold him back.

🚨DEMOCRAT ELECTION OFFICIALS BANNING TRUMP POLL WATCHERS IN PHILLY. This is happening all over the City. The steal is on! https://t.co/sWS9lXL5vh [1]

What about the reports that it was a fake poll watcher? Well, how about some hardcore truth in the form of his certification. There is no reason that poll watcher should have been denied entrance, but here it is, and the Democrats don’t want to own up that they are about to lose the election, so they rather cheat.

ILLEGAL campaigning INSIDE of a polling location in Philly. Man in blue is handing out DEM literature to voters IN LINE TO VOTE. This is why DEMS are keeping TRUMP WATCHERS OUT. They are STEALING it! This needs to STOP! pic.twitter.com/qnJ3D8o2ie [3]

But why would they want to keep poll watchers from getting inside? Maybe because that is where the second part of the story comes in because according to voters – several people were handing out Democratic literature to people waiting to vote. This is clearly against the law and would require any poll watcher from notifying the authorities.

As you can see above, the man wearing blue, a democrat color, is handing out Democratic pamphlets to voters waiting to cast their vote. Again, this is why the political process doesn’t work and why people constantly question the government. It isn’t the government they need to question – it is the Democrats. They have proven countless times that the only thing that matters to them is winning and complete control. Just look at what they did when a poll watcher tried to get inside. They quickly shut down the entire building. Why? What is it exactly they are trying to hide or than a rigged election?

This piece was written by Jeremy Porter on November 3, 2020. It originally appeared in DrewBerquist.com [5] and is used by permission.