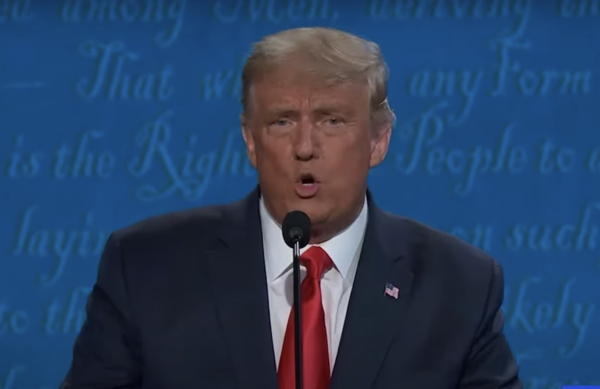 A pair of obscure and rather unscientific polls with high success rates in the past seem to be pointing to a victory for President Trump.

We present these purely for entertainment purposes, not as an actual prediction on our behalf.

A Halloween store in St. Louis has provided indications [1] of the next winner every election dating back to 1984 based on sales of their presidential candidate masks.

Ed Brock, the owner of Johnnie Brock’s Dungeon, reports that Trump masks outsold those of Hillary Clinton in 2016, despite the obvious scare factor.

“Sixty-six percent of the sales of masks — political masks between the two, Biden and Trump — 66% are Trump and 34% are Biden,” Brock told NBC 5.

“What this is showing me is that if it stands, if this formula stands, that Trump will win this election,” he explained.

If Halloween masks aren’t enough scientific proof for you then may we suggest … cookies [8]?

A cookie poll conducted by a Pennsylvania bakery has predicted the last three elections correctly – and this year they’re saying Trump will come out on top.

Kathleen Lochel, owner of Lochel Bakery, told Fox News [9] that cookies made celebrating the President are outpacing Biden’s by a nearly 6-to-1 rate.

Trump-themed cookies are “vastly” outselling their Biden-themed counterparts, Fox News reports [9], “with some customers driving from neighboring states in order to get their hands on the treats.”

Another bakery in Houston, Texas, is seeing the same results with their cookies.

PRESIDENTIAL COOKIE POLL: A bakery in Houston, Texas is taking an unofficial poll for the 2020 election. They’ve accurately predicted who would win the White House in the last three presidential elections. Check it out. pic.twitter.com/jxQRimyYyi [10]

RELATED: Pelosi: House Will Step In And Decide Who Is President If No Clear Winner [12]

“Our campaign believes that tonight will be a landslide,” McEnany said during an interview on “Fox & Friends.”

Was she basing this on the cookie/mask polls? We’re kidding.

Many respectable polls are indicating Biden holds a lead nationally and in several key swing states.

Those same polls predicted a Trump defeat during the last presidential election cycle as well.

President Hillary Clinton suggests they may need to be taken with a grain of salt.