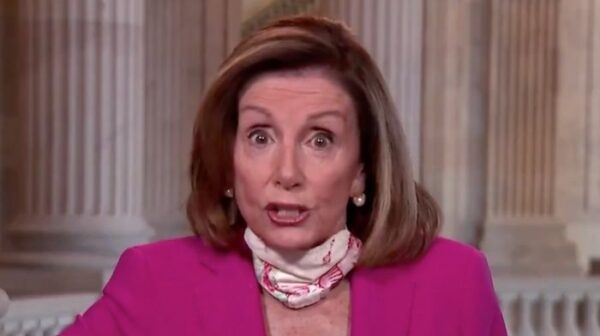 House Speaker Nancy Pelosi (D-CA), who has been tapped by Democrats to run for Speaker for a seventh and eighth year in a row, spoke out on Wednesday to seemingly suggest that this might be her last term in the position.

“At the start of this Congress, there was a discussion about putting in place some kind of term limits for the leadership team. I’m curious if you anticipate this coming Congress would be your last as Speaker,”  Pelosi was asked in a press conference, according to Fox News [1].

“When that conversation took place, there was a move to put limits on the leadership and chairs of committees,” she replied. “They said they were going to do it. They didn’t do it. Whether it passes or not, I will abide by those limits that are there.”

“So is that a kind of Shermanesque statement?” the journalist questioned.

“No, it’s not. It’s a statement that I made,” Pelosi fired back. “Listen, if my husband is listening, don’t let me have to be more specific than that. because we never expected to have another term now. I consider this a gift and I can’t wait to work with Joe Biden. I don’t want to undermine any leverage I have but I made that statement.”

Democrats had a virtual meeting this same day to choose their top leaders for the 117th Congress. Pelosi was unopposed in running for Speaker, while the GOP is going to run House Minority Leader Kevin McCarthy (R-CA).

The House of Representatives will officially elect a Speaker on January 3, when it reconvenes. In order to be named as Speaker, a candidate must get an outright majority of the entire House, which means 218 votes out of 435. In the last Congress, a total of fifteen Democrats voted against Pelosi being named as Speaker.

Pelosi served her first four terms as Speaker during the 2000s until Republicans recaptured the House majority in 2010. Conservatives everywhere will certainly be quite pleased indeed if this is her last term in the position.