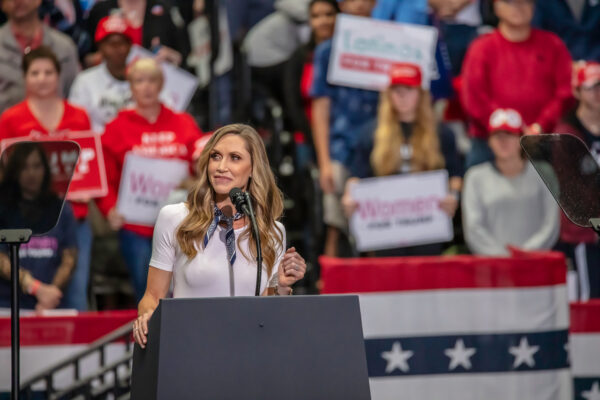 There are some naive people out there who posit Donald Trump, Jr. should run for president in 2024. Well, first off his dad may have dibs on that again. Second, no discernible path. But, you say, dad did it. Uh huh, after decades in the public spotlight and at just the right time. But what about Dubya? He was governor of Texas first, remember? So, let Don the Younger run a state for a term or two and we’ll talk. Though, this columnist would not mind Kim Guilfoyle as first lady (insert Bob Hope growling sound).

But, a lesser office like House member or senator may be a nice starting point for Don the Younger, Eric, or especially Ivanka, who has so much natural star power she could get elected to most things anywhere in Trump Country. However, another family member is thinking of running for office. Lara Trump, the president’s daughter in law and wife of Eric, may be eyeing getting in the Senate race in North Carolina now that incumbent Richard Burr is retiring.

Burr, who earlier in the year left his post as Senate Intelligence Committee chairman amid a probe into insider stock sales during the early stages of the virus, realized he was damaged goods because of the mere allegation and recently announced he wouldn’t run for reelection. Lara Trump, like her sister in law Ivanka, is gorgeous and articulate. She’d have a real shot at the seat.

FNC: “A person familiar with President Trump’s daughter-in-law’s plans, who has discussed them directly with her, told Fox News Friday that she is ‘interested and exploring’ whether she will run. Meanwhile, White House Chief of Staff Mark Meadows — who had been mentioned as a possible Senate candidate in his home state — said Friday he will not run in 2022, the News & Observer of Raleigh reported. ‘I love the people of North Carolina. But I not only have no plans, I have no intentions to run for the Senate in 2022,’ ”

Meadows as a former Republican House BMOC and Freedom Caucus founder, not to mention current White House Chief of Staff, would have been a formidable contender. But after the president leaves office in January he will probably relax and soon plan a future run for higher office or cash in on his DC resume for a lucrative post in the private sector. That sets the stage for the Trump daughter in law scenario.

Trump, whose husband is a Trump Organization executive vice president, was born in Wilmington, N.C. “The president gave her the responsibility of winning North Carolina in 2016 and in 2020 — she did it both times,” a GOP source said, calling her a ‘household name’ and saying she is ‘well-known among the Republican Party…Were she to run, she should be considered an immediate front runner.’ “