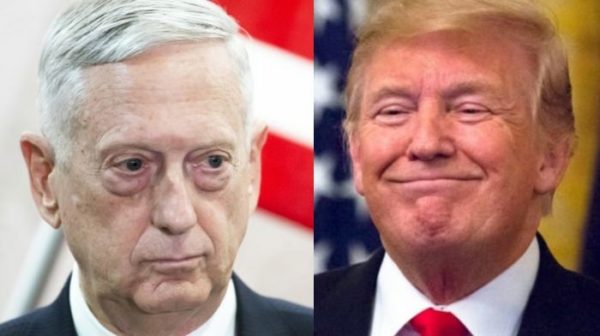 Mattis resigned from the Trump administration in December 2018 after the President ordered a troop drawdown in Syria.

"In January, when Biden & his national security team begin to reevaluate US foreign policy, we hope they will quickly revise the national security strategy to eliminate ‘America first’ from its contents," writes Jim Mattis & friends. Truly pathetic. https://t.co/WebQoRlLGs [1]

Mattis said in his resignation letter that the U.S. needed to show more “respect” to its allies.

In Mattis’ new article published on Foreign Affairs on Monday, he called for the “end of America First.”

Mattis wrote, “The United States today is undermining the foundations of an international order manifestly advantageous to U.S. interests, reflecting a basic ignorance of the extent to which both robust alliances and international institutions provide vital strategic depth.”

“That has damaged the country’s ability to address problems before they reach U.S. territory and has thus compounded the danger emergent threats pose,” Mattis said.

Mattis noted that he had previously advised toward and hoped for getting rid of “America First.”

Mattis wrote, “In January, when President Joe Biden and his national security team begin to reevaluate U.S. foreign policy, we hope they will quickly revise the national security strategy to eliminate ‘America first’ from its contents, restoring in its place the commitment to cooperative security that has served the United States so well for decades.”

“The best strategy for ensuring safety and prosperity is to buttress American military strength with enhanced civilian tools and a restored network of solid alliances—both necessary to achieving defense in depth.,” Mattis added.

“The pandemic should serve as a reminder of what grief ensues when we wait for problems to come to us,” Mattis finished.

President Dwight Eisenhower warned over a half century ago about a then emerging “military-industrial-complex” that would seek to keep America at war for political and cronyist interests, not necessarily national security.

President Trump has been one of the rare Commanders-in-Chief to try to put America first as opposed to the corporate and political interests that dictate U.S. foreign policy.

James Mattis obviously wants Washington business to continue as usual. Is it any wonder why President Donald Trump was elected in the first place?

Read more at ThePoliticalInsider.com:
Ilhan Omar Slammed By Georgia GOP Women – ‘You Married Your Brother’ [9]
Trump Supporting Actor Scott Baio Threatens to Move to Utah to ‘Unseat’ Mitt Romney [10]
Trump Vows to Continue the Fight Against What He Calls ‘Most Corrupt Election in American Political History’ [11]