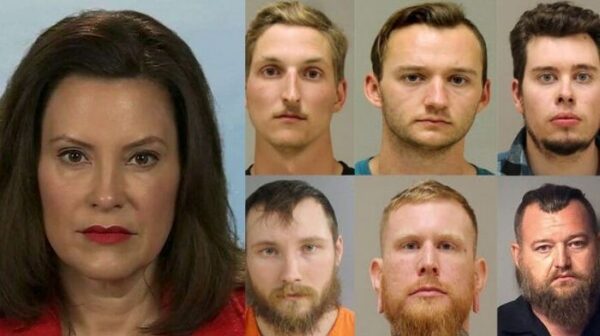 Last month, we reported [1] that the FBI had managed to thwart a plot to kidnap and kill Michigan’s Democratic Governor Gretchen Whitmer. Now, some grizzly new details about this plot have come to light.

A court brief filed by the Michigan Attorney General’s Office stated that the so-called Wolverine Watchmen, the militia that had plotted the kidnapping, reportedly also planned to burn down the state’s Capitol building. Their plan involved storming the building, in which they would hold hostages or set the building on fire, according to the Detroit Free Press. [2]

This brief was filed in Jackson County’s 12th District Court ahead of a hearing for Pete Musico, one of the men who has been charged in the kidnapping plot.

“Plan A consisted of recruiting 200 men and then storm the Capitol building in Lansing while Congress was in session,” read the brief. “They were to take hostages, execute tyrants and have it televised. It would take about one week and that no one is coming out alive.”

“The secondary plan was to storm the Capitol building in Lansing when Congress was in session,” the brief added. “They would then lock the entrances/exits to the structure. They would then set the building on fire.”

Six men have been hit with federal charges of conspiracy to kidnap in connection to the Whitmer plot. Another eight defendants, including Musico, have been charged at the state level.

Each of the men involved have either pled not guilty, or not entered a plea at the time of this writing.

Whitmer has long tried to place some of the blame for this kidnapping plot on President Donald Trump and his rhetoric despite the fact that he had nothing to do with it. White House Press Secretary Kayleigh McEnany, however, has shot these attempts down.

“Trump has continually condemned white supremacists and all forms of hate,” she said, according to Fox News [3]. “Whitmer, and now Governor Northam, are sowing division by making these outlandish allegations. America stands united against hate and in support of our federal law enforcement who stopped this plot.”