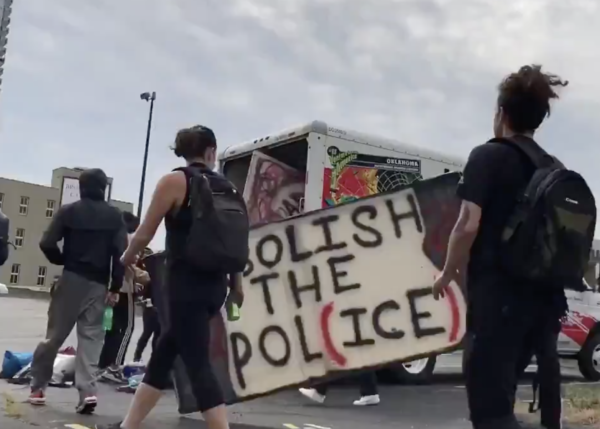 Since their conception, Black Lives Matter has demanded that the police be defunded and abolished. They plead with Americans all this while promoting violence and looting wherever they go. They claim to want a better America but all they do is tear apart the one they have. Now, not surprising – they want more. One of the co-founders of BLM, Patrisse Cullors, is now demanding Joe Biden abolish both police and prisons.

In July, the Democrats decided to introduce a piece of legislation that is so far left that it might even be too progressive for them. Coined the BREATHE Act, it should be noted that the proposal has yet to be brought in front of Congress. But when it does, they will see that the Act wants to abolish the police and prisons. But don’t worry, we are sure they have a plan for all the life-time murders and killers still on death row.

But the Act wants to do more than just tear down the systems that protect us. It also wants to dismantle the “surveillance tactics that are disproportionately used to target Black, Brown, and Muslim communities by prohibiting predictive policing, racial recognition technologies, drones, and similar tools,” The Act goes on to state it wants to, “Eliminating the use of electronic monitoring, including ankle monitors, smartphone applications, and any other tool used to track location.”

It is also interesting that the Black Lives Matter founders would be calling on the so-called President-elect to get rid of a system of policing that he personally helped put in place. Back in 1994, Joe Biden was the chairman of the Senate Judiciary Committee, which means that he mainly helped pave the way for the 1994 Violent Crime Control and Law Enforcement Act.

Again, this is just one of the many problems with the Black Lives Matter movement. They know very little about the person the supposedly helped get elected. Biden isn’t the savior that is going to Heal America. We have said it before, and it is worth saying again – Biden is going to steal this country. Black, White, Brown – it doesn’t matter, Biden is and always will be a corrupt politician.

This piece was written by Jeremy Porter on November 21, 2020. It originally appeared in DrewBerquist.com [1] and is used by permission.