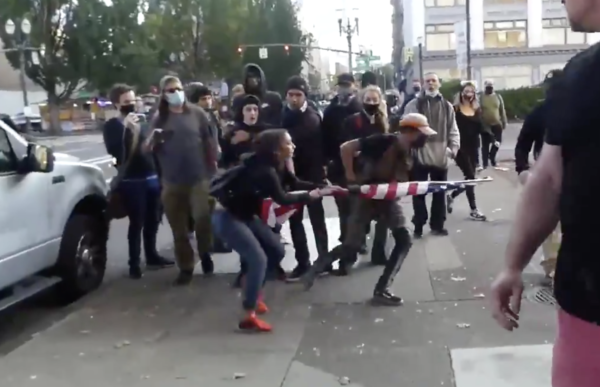 What happens when Baghdad Bob [1] becomes our nation’s news anchorman. Well, we don’t have to wonder because it’s happened. First, you remember him, right? Iraqi Information Minister Mohammed Saeed al-Sahhaf. He was Saddam Hussein’s spokesman during the U.S.-led invasion of Iraq. He’d give a “news report” that everything was fine, and the Allied troops were nowhere in sight. This, as American news outlets juxtaposed Baghdad Bob’s version of events with images of U.S. Army tanks rolling down Iraqi streets.

Americans appreciated the unintended comfort of humor he provided during an otherwise serious time. Like when he said, “God will roast their stomachs in hell at the hands of the Iraqis.” There has been no confirmation about what happened to the dictator’s mouthpiece. However, as Peter Lucas wrote [2] in the Boston Herald when making a similar comparison, “there is no truth to the rumor that he now runs CNN.” Likely, true, but I wouldn’t put money on it.

As a cop, I became accustomed to people lying to me. I remember in the academy our crime scene investigation/interrogation instructors taught us that, as we grew experienced on the streets, we’d one day realize we possessed two finely tuned bullshit detectors. They were attached to the sides of our heads.

I understand having to use this high-tech advantage at work but at home, watching the nightly news… really? But that’s what’s happened, hasn’t it? I’d list all the media outlets in on the let’s-help-the-Democrats-win-at-all-costs media cabal, but I’d far exceed a manageable word count. What we have now is the legacy media vs. the integrity media.

Think about it this way: The other day I was talking with my wife and I said, “You know how I know we have integrity on our political side (conservative/libertarian)?”

Used to my rants, she humored me and asked, “How?”

I said, “because the legacy media (ABC, CBS, NBC, New York Times, etc. and their cohorts, now, including the FOX News-corporate), only provide their audiences with limited, redacted, biased information, or they just censor it. Their audiences only know, at most, a biased half of the story on any issue.

The integrity media (Rush Limbaugh, Glenn Beck, Mark Levin, Sean Hannity, Tucker Carlson, Laura Ingraham, Dan Bongino, Newsmax, The New York Post, The Boston Herald, etc. and their allies), by comparison, provide the entire story on issues. They also admit their political bias when necessary, and they do not limit, redact, or censor the news. In fact, they are most fond of admonishing their audiences not to believe them but to do their own research and make up their own minds.

I cannot count the number of times I see news happening—real, undeniable news stories reported in the integrity media that just don’t show up in the legacy media. For a recent example, a massive gathering of President Trump supporters swarmed into Washington D.C. last weekend. Supporters organized the MAGA demonstrations to show the President support and to vent frustrations over an obviously contaminated election by commiserating with fellow patriots who love America.

After the event, Antifa and BLM supporting thugs attacked peaceful Trump supporters. In one particularly heinous incident, the mob verbally and physically [3] attacked a young couple walking with their children, mom pushing a stroller. They were wearing not only Trump gear but also police supporting attire (insert blood-chilling scream [4] here).

The looks on those children’s faces, scared to death, were distressing to watch. The fact the family appeared to be of mixed race made the incident all the more incongruous. I guess that black mother and her children’s black lives don’t matter. The Democratic Party’s Brownshirts descended on them and other innocent victims like a sandstorm [5] on a Middle Eastern city.

The brutes harassed and assaulted the family for supporting the current (and hopefully continuing) Republican President of the United States. President Trump rightly referred to these criminals as, “ANTIFA SCUM [6]!” The President also asserted Democrat Mayor Muriel Bowser wasn’t doing her job. Something I, as a retired police officer, wondered about. How could she possibly not have seen this coming and adequately staffed the event? It’s not as if leftist goons don’t attack Trump supporters all the time. Or… Madame Mayor is this what we get for supporting someone you don’t like?

These attacks are not isolated. Although you’d never know it by watching the legacy media. Antifa and BLM thug “medics [7]” attacked another Trump-supporting young couple and their children during the D.C. event. The mob terrorized them, including pouring an unknown liquid on them. Also, back in October, BLM and Antifa thugs threw rocks and attacked [8] a “Jews for Trump” rally.

Interestingly, police arrested 11 people during the Jews for Trump rally. And while I do not support so-called “hate crimes” (because they punish thoughts, not just actions), but the Left supposedly does. However, the story says the suspects were charged with a variety of crimes, including assaulting a police officer, with no mention of any “hate crime.” Remember, they targeted a Jewish group. Anyone think any group attacking a Muslim march wouldn’t have been slathered with hate crime charges?

So, hearing about the attack on that mixed-race family in a text from my son, where could I go to find more news about the incident? ABC, CBS, NBC, CNN, MSNBC, etc. No, if I went to any of those sources, I’d wonder why my son was lying to me.

Violent attacks on peaceful, innocent people, simply walking back from a political gathering in our nation’s capital is a legitimate news story, right? But just like Joe and Hunter Biden’s corrupt business dealings, including in Ukraine, Russia, and China, attracted little to no curiosity from the legacy media, or it got outright exoneration, neither do political barbarians warrant coverage for attacking young families. No. If you don’t want your news provided by Baghdad Bob, you’ll need to watch the integrity media. Just like millions of Americans [9] are now doing.