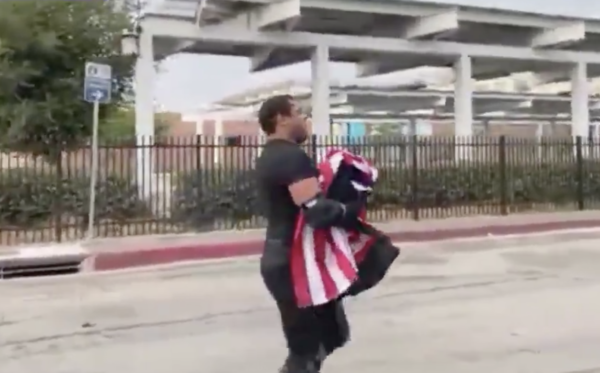 Since their conception, the Black Lives Matter movement, which was founded by three Marxists, and Antifa has spread a message of togetherness and peace. They cry for police reform while never throwing a single punch. The only problem is – they do none of the following. They shout, scream, hit, and loot all in the name of justice. Yet they know little of the facts they scream. Well, a new video has surfaced showing BLM doing what they do best – beating, hitting, and screaming. Only this time, they do it to a Veteran.

While the spark that caused the fight is unknown, we do know the incident took place at the Say Their Name Graveyard Protest in Los Angeles, California. In the video below, you can see the black man being pushed, assaulted, and even dragged by BLM members. They scream at him, blocking his way and right to protest.

It's going down in Los Angeles right now. Looks like a Patriot being assaulted by a group of ideas (Antifa) for having an American flag. Supposed to be some graveyard protest. Link in tweet below for live. https://t.co/RfJqw5qv4w [1] pic.twitter.com/x9HijGDrtE [2]

Finally breaking free, the man yells at the crowd, “This is America. I served my country. I bled for my country.” While being a veteran might change the perspective on most crowds, the BLM members act the complete opposite, pushing the veteran further away.

One person in the crowd can even be heard screaming at the man, “I don’t give a f*ck about veterans.”

Another supposed protester even adds on to the comment by shouting, “Let him play with the cops. Let’s go.”

All while the fighting is going one, the veteran remains to hold fast to the America flag. Even when the crowd tries to rip it from his grasp, the veteran lays on top of it, not once letting go. Luckily, the police were called in and quickly take the veteran to safety and away from the BLM protesters.

This story and many like it have yet to be condemned by the Democrats or their Presidential hopeful Joe Biden. They constantly attack the President for showing support to the Proud Boys, yet when was the last time someone from the Proud Boys attacked a member of an opposing belief. The only thing the Proud Boys are guilty of is believing that America is the Best in the West – which it is!

This piece was written by Jeremy Porter on October 25, 2020. It originally appeared in DrewBerquist.com [4] and is used by permission.