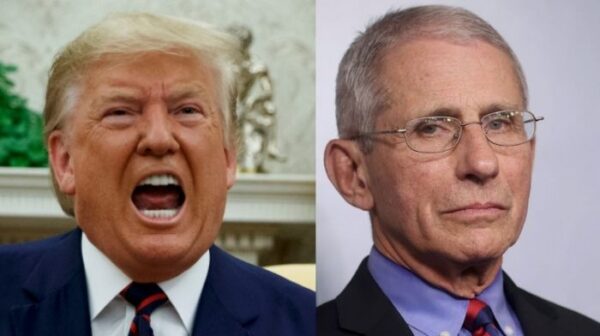 President Donald Trump spoke out on Monday to blast Dr. Anthony Fauci during a campaign call, describing him as a “nice guy” who is also a “disaster.” He added that the American people are sick of hearing about COVID-19.

New York Post Washington correspondent Ebony Bowden claimed that Trump had also said that firing Fauci would be a bombshell story, and that he appeared to suggest that doing so before the election would be a bad idea.

President Trump told campaign staff he thought Dr. Anthony Fauci was "a disaster" while indicating he wanted to fire him. "Every time he goes on television there’s always a bomb, but there’s a bigger bomb if you fire him," he said, adding he's “been here for 500 years.”

This came after Fauci went on “60 Minutes” over the weekend and said that he was “absolutely not” surprised that Trump contracted coronavirus. He added that he had been worried as he watched the September  26. Rose Garden event announcing Judge Amy Coney Barrett’s nomination to the Supreme Court, as he immediately noticed that there was “almost nobody wearing a mask.”

“‘Oh my goodness. Nothing good can come outta that, that’s gotta be a problem.’ And then sure enough, it turned out to be a superspreader event,” Fauci said.

Not stoping there, Fauci claimed that Trump had restricted his media appearances, and blasted the president for using his remarks [4] in a television add, claiming that his comments were taken out of context.

Fauci then admitted that he was wrong back in March when he said that there was “no reason to be walking around with a mask,” as he now believes that “masks really do work in preventing infection.”

“When you find out you’re wrong, it’s a manifestation of your honesty to say, ‘Hey, I was wrong. I did subsequent experiments and now it’s this way,'” Fauci said.

However, he also said that he is opposed to putting another national lockdown in place.