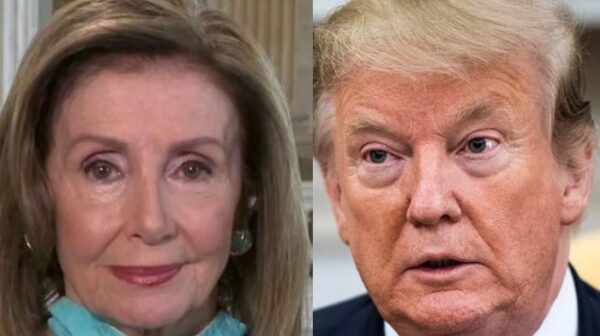 Friday marked one year since Speaker of the House Nancy Pelosi (D-CA) had spoken to President Donald Trump. Though it is unprecedented for a Speaker to go that long without talking to the president, Pelosi defended this move while speaking to reporters that day.

When asked by MSNBC host Nicolle Wallace if she would be open to talking to Trump if he reached out to her, Pelosi replied, “It would depend on what the purpose is.”

Pelosi and Trump last talked to one another at the White House on October 16, 2019, when they met to discuss pulling U.S. troops out of Syria, according to The Hill [1]. This meeting quickly went off the rails, with the two of them trading insults before Pelosi stormed out with her fellow Democrats.

Afterwards, Trump tweeted out a photo showing Pelosi pointing at him and other members of his administration, captioning it, “Nervous Nancy’s unhinged meltdown!” Pelosi said that at the time, she had been telling Trump that “all roads with you lead to [Russian President Vladimir] Putin.”

“What was funny about it is the White House put out that photo, because we’re not even allowed to wear a smartwatch in the room,” Pelosi said on Friday. “They put that out and I said, ‘Thank you very much, Mr. President.’ ”

“But we left because there was no purpose to staying there,” she added. “There was no truth coming from the other side.”

Pelosi went on to say that though she is not speaking to Trump, she is still working with White House representatives including Chief of Staff Mark Meadows and Treasury Secretary Steven Mnuchin.

“So it isn’t as if it has to be person to person between the Speaker and the president,” she explained. “It has to be knowledge for knowledge in terms of what our purpose is, what we know about the challenge we face and what the possible solutions are.”

Pelosi added that she and the White House are still disagreeing about earned income and child tax credits as outlined in Democrats’ coronavirus relief proposal. She said that Mnuchin has not yet sent her his proposed changes on a testing strategy, and that she expects to talk to him again on Sunday.

“So we’ll still waiting to see what the changes are, because as you know, the devil and the angels are in the detail,” Pelosi said.