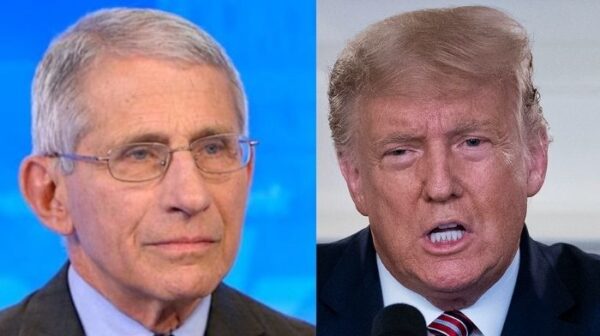 Yesterday, we reported [1] that President Donald Trump had blasted Dr. Anthony Fauci as a “disaster.” Now, the director of the National Institute of Allergy and Infectious Diseases has broken his silence to offer his response.

Trump reportedly ranted against Fauci to his campaign staffers on Monday.

“People are tired of hearing Fauci and all these idiots, these people, these people that have gotten it wrong. Fauci is a nice guy, he’s been here for 500 years, he called every one of them wrong,” Trump said. “Every time he goes on television there’s always a bomb. But there is a bigger bomb if you fire him. But Fauci is a disaster. I mean, this guy, if I listened to him, we would have 500,000 deaths.”

While being interviewed on AM radio station KNX1070 [2], Fauci tried to dismiss Trump’s comments, calling them a “distraction.”

“I would prefer not to comment on that and just get on with what we are really trying to do and what we are trying to do is to protect the health and welfare and safety of the American people predominantly, and ultimately, of the world,” Fauci said. “We are seeing an uptick in cases — higher than they’ve ever been. Many, many states that had been doing reasonably well are now showing upticks, that’s what we should be concentrating on.”

After adding that he did not want to create a “me against the president” mentality, as he feels that would be unhelpful, Fauci proceeded to quote the movie The Godfather.

“[Addressing the virus is] the only thing I really care about,” he explained. “That other stuff, it’s like in The Godfather: Nothing personal, strictly business as far as I’m concerned. I just want to do my job and take care of the people of this country.”

Trump attacked Fauci once again during an interview with “Fox & Friends” on Tuesday morning.

“He’s a Democrat. He’s actually a very good friend of the Cuomo family,” Trump said [3] of Fauci. “The only thing I say is he is a little bit sometimes not a team player. But he is a Democrat.”