By The Political Insider Staff
October 15, 2020

The number eclipses that of the $364.5 million raised in August, which the campaign boasted represented “the best month of online fundraising in American political history.”

“The former vice president’s campaign has raised three-quarters of a billion dollars in just two months, a colossal amount of fundraising that has helped heap pressure on President Donald Trump’s campaign to keep up,” CNN reports.

Biden told a supporter in a video that he is “really humbled by” the contributions which is “more money than I’ve ever raised in my whole life.”

Republicans are facing an avalanche of money. That’s what happens when you try to stand up for the American worker. “Joe Biden Shatters Campaign Fundraising Records, Nets $383 Million In September” | HuffPost https://t.co/5N5ZlKARzl

Should Trump Be Worried About Biden’s Fundraising Numbers?

President Trump isn’t exactly scraping the bottom of the barrel when it comes to fundraising numbers.

While the campaign has yet to announce their September haul, Ballotpedia reports that their campaign receipt totals overall stand at more than $476 million, well ahead of their number in 2016.

This represents a tick above $64 million behind Biden in total receipts to date. However, in 2016, Trump trailed Clinton by over $227 million at the same point and still pulled off a shocking victory.

CNN Business reported last month that “professionals on Wall Street are shunning Trump and funneling staggering amounts of money to his opponent.”

This, despite the President “promising four more years of low taxes, light regulation and a laser-focus on the stock market.”

The Economy is about ready to go through the roof. Stock Market ready to break ALL-TIME RECORD. 401k’s incredible. New Jobs Record. Remember all of this when you VOTE. Sleepy Joe wants to quadruple your Taxes. Depression!!! Don’t let it happen! #MAGA

It bears repeating that Clinton lost spectacularly in the 2016 election despite far-outpacing Trump in committee money and more than doubling his total in “outside money.” 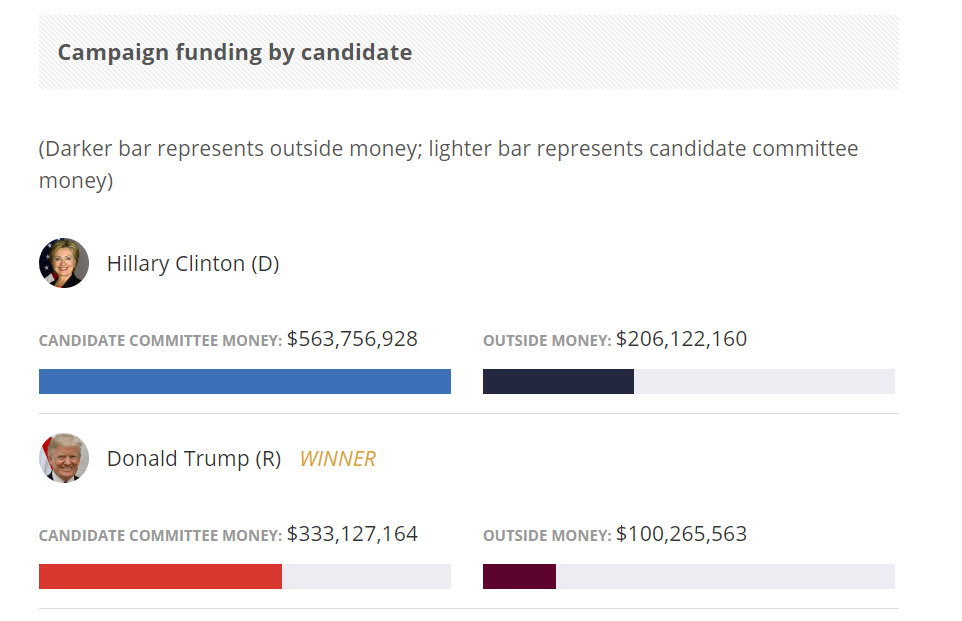 Clinton was also the beneficiary of journalists who contributed to her campaign – 96 percent for to 4 percent for Trump.

Despite all those handicaps, Trump still managed to pull off the victory.