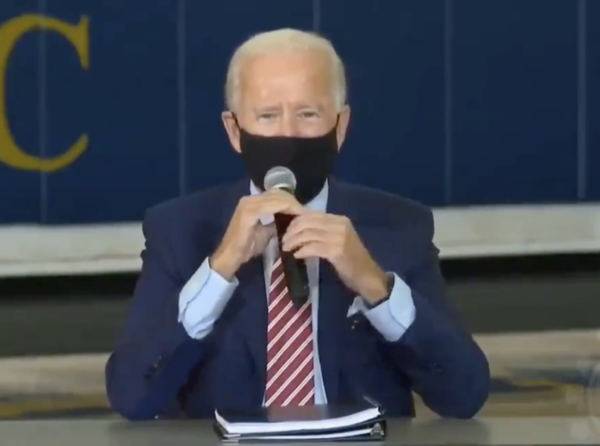 Joe Biden has come out with yet another racist gaffe, insinuating that black women would be the ones stacking grocery shelves in the pandemic.

The clip was tweeted out by Rob Smith, a veteran of the Iraq War, and senior contributor to Turning Point USA. The video footage, which seems to be from at least one week ago, depicts Biden at a press conference.

“The reason I was able to stay sequestered in my home is because some black woman was able to stack the grocery shelf,” Biden says to the camera, without a hint of irony.

Joe Biden: “The reason I was able to stay home during the pandemic is because Black women were able to keep the grocery shelves stocked.”

Vice President Biden has a history of making racist gaffes and remarks. In August of this year, [3] speaking to a panel of the National Association of Black Journalists, Biden claimed there is no diversity of thought within the black community.

Latinos have diversity of thought unlike black people who all think alike, says Joe Biden. pic.twitter.com/WRZKnUuTVU [4]

And in May, during an interview with Charlamagne tha God, Biden insinuated no black people would ever vote for President Trump over him.

“If you have a problem figuring out whether you’re for me or Trump, then you ain’t black,” Biden told Charlamagne. [6]

Media Covering Up His Mess

However, mainstream media outlets have generally chosen to ignore, rather than draw attention to, any of the gaffes from the former Vice President.

Fox News noted [7] that his comments, especially regarding the comparison of black and Hispanic communities, were not seen anywhere on MSNBC programming for three nights in a row when the story broke back in August.

“Is it very insulting?” King asked. “Did Joe Biden disparage and insult the Black community?”

“When Republicans make a mistake, they get pilloried by the national press. But when Democrats blunder and fumble, they can usually count on a friendly news media to help them clean up the mess. Which is good news for Joe Biden,” Media Research Centre editor Bill D’Agostino wrote. [8]

Here's a compilation that shows how the media covers for Joe Biden's many, many, many gaffes, racial blunders, and creepy touches. pic.twitter.com/flV37YITuv [9]