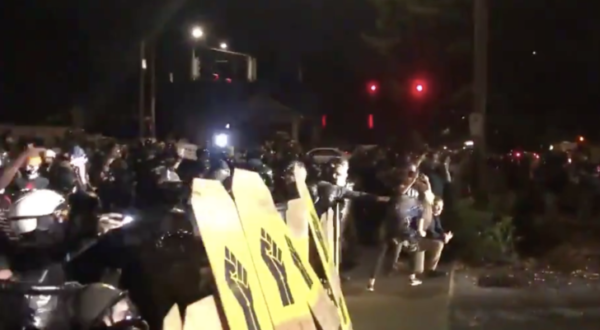 The American people are waking up from a media induced stupor and recognizing the violent Antifa and Black Lives Matter riots for what they are: A violent Democrat attempt to extort the country into voting for Joe Biden.

A survey released Thursday by the Associated Press-NORC Center for Public Affairs Research shows that 44% of Americans condemn the violent Democrat-sponsored riots, while 39% approve. In June, 54% approved of the protests. That’s a 15 point drop for the rioters over 3 months.

That means 61% of Americans do not approve of the riots. Logically, those are likely to be Trump supporters, as Democrats need the riots to keep up the violent pressure on the nation. That 61%, as the president is campaigning on a law and order message, could translate into a hefty advantage for the president.

Said one respondent, “I was supportive back in June, but after seeing everything up until now, I’m almost dead against them,” said Dave Hipelious, 63, of New Lenox, Ill., who is a retired pipe fitter. He said his support for the riots ended when he saw the violent unrest, arson, and looting that typified the events. How anyone could be supportive of violent destruction in the name of partisan politics is beyond any intelligent person. But such was the media drumbeat that some mistook the riots for peaceful protests. Until the scales fell from their eyes. Welcome to reality, Dave.

“I was a pretty wild young man,” Hipelious said. “Every time the police stopped me, and every issue I had with them, I was completely in the wrong. I do believe they are doing their job right.” That’s called growing up.

Among Latins, 31% approve, compared with 44% in June; 63% of black Americans support the riots, down from 81%, with more now saying they neither approve nor disapprove. 69% percent of Latins disapprove of the riots? There goes the Latin vote for the Democrats. And Trump could get 37% of the black vote? Just where will Biden go for a majority?

Fox News also reported, “Eighty-four percent of black Americans, but just 42% of white Americans and 50% of Latins, say police more often use deadly force against a black person than a white person. Meanwhile, 74% of black Americans say the criminal justice system is too lenient when officers cause injury or death, 47% of white Americans and 50% of Latins say the same. Among Republicans, 75% say they disapprove of the riots, up from 56% in June. Just 9% approve, down from 29% then. And more Republicans now describe riots as mostly or all violent, 52% vs. 36%.” These are all good numbers for the president and the country. If they hold, as the riots increase as we get closer to the election, then this issue will break for the president and with it perhaps the election.