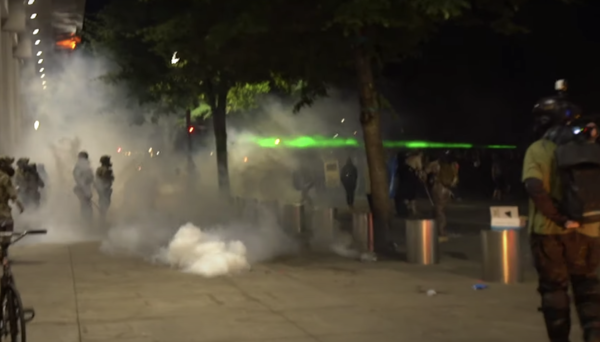 Portland has been at the center of the news for several months as rioters vandalize government property and ignore Covid-19 mandates. But law and order are slowly taking back control as a grand jury recently indicted a rioter for assaulting a police officer with a high-intensity laser.

The rioter in question is Bryan Kelley, 36, and he is being charged with unlawful use of a weapon, second-degree assault, and two counts of directing a laser pointer with the intent to harm. While the third doesn’t carry much weight, the top two are both felonies if found guilty. In a statement released by District Attorney Mike Schmidt, he claims Kelley used, “the laser pointer as a dangerous weapon to unlawfully and intentionally and knowingly causing physical injury to a person he knew to be a police officer.”

The reported crime happened the night of August 25th when rioters breached the gates at Portland City Hall. Police declared the protests to be nothing more than riots in the city as protesters sought to harm officers. This is when officers saw Kelley shining a laser in a police sergeant’s eyes. He was quickly detained, and the laser confiscated.

After the arrest, Police Chief Chuck Lovell told reporters, “An assault on the police is an assault on the community we are sworn to protect. I commend the officers out there every day and night, and detectives whose follow up makes arrests like this possible. Anyone hiding behind legitimate protests to commit acts of violence should know the investigations keep going even if you get released after your initial arrest.”

While some might not see a laser as all that dangers, detectives uploaded a video, featured below, to YouTube, showing how powerful the laser was and the damage it could do to something as simple as cardboard.

Laser pointers might be the least of officers’ worries as a few months ago President Trump sent federal agents to help control the city after rioters were seen using machetes and mortars. There were also components to a pipe bomb found during the protests. Sadly, this type of behavior isn’t just secluded to Portland as over the weekend, officers in New York were cowardly attacked by rioters.

This piece was written by Jeremy Porter on September 17, 2020. It originally appeared in DrewBerquist.com [5] and is used by permission.