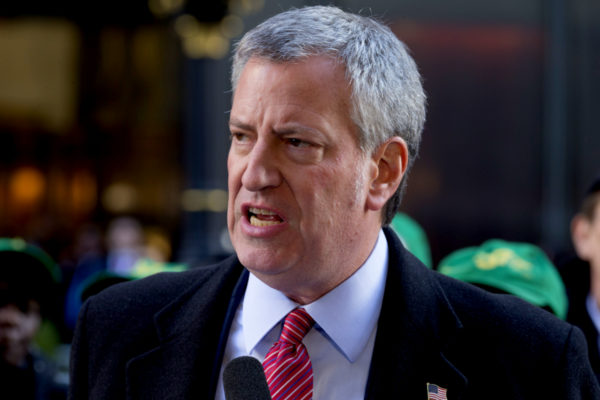 Marxist Mayor Bill DeBlasio has run NYC into the ground. All of the Giuliani and Bloomberg reforms and improvements are gone. In their place has returned the crime, trash, and absurd taxes of the 1970s and before. Added now are a PC sensibility and rampant street terrorism egged on by a Marxist mayor. Now even the hard left school district had had enough. On Sunday they voted to strip the mayor of control of the school district and have the state take over.

Just how bad is Mayor Bill at his job? Bad enough for the head of NYC's Council of School to demand he step aside so that the adults in the room can run the show. Resign!#KAG [1] #MAGA2020 [2] https://t.co/knPHwzn2pr [3]

The Wall Street Journal reports, “The leaders of New York City’s principals union on Sunday called on Mayor Bill de Blasio to cede control of city schools to the state’s Education Department for the remainder of the Covid-19 crisis after they unanimously passed a vote of no confidence in him. The vote came just days before most city schools in the nation’s largest school district are set to reopen for in-person instruction. The city has offered its one million students the choice of fully remote learning or a hybrid of remote learning and some in-person instruction. About 46% of students have chosen to have fully remote classes, which shot up from 26% in August, according to the city Education Department…In the past month, the mayor and schools Chancellor Richard Carranza have twice made last-minute decisions to delay the reopening of schools because of a teacher shortage…On Friday the city made another 11th-hour switch, allowing teachers instructing remotely to work from home rather than their schools. The principals union said it wasn’t notified ahead of time about the change.”

In its no-confidence resolution, the principals union said DeBlasio and his city schools chancellor “have entered into grossly irresponsible staffing agreements that fail to prioritize the needs of school children and their families.”

Mark Cannizzaro, president of the group, said Sunday that city schools need a change of leadership, “The mayor and the chancellor may have made too many mistakes right now and we need them to reconsider. Too many repeated errors occurred, and we need to be able to do better by our folks and do better by our children…“The frustration and the difficulty is immense. We are still 100% supportive of trying to open our schools in the best possible way we can.”

But DeBlasio’s team disagrees, “This week, more kids will be safely sitting in New York City classrooms than in any other major American city—a testament to city leadership and our educators’ commitment to their students, and the importance of in-person education,” said city schools spokeswoman Miranda Barbot.

A spox for the United Federation of Teachers teacher’s union, a group that backs DeBlasio, said the city has known about the staff shortage since the spring and has prepared for it. “The current agreement is designed to staff the schools in a safe manner, and the city has committed to hiring and redeploying enough qualified educators to meet this challenge.”

This back and forth between DeBlasio, competing unions, the city and the state will garner headlines and motivate political gamesmanship. It will, however, do very little to support proper education in NYC schools.