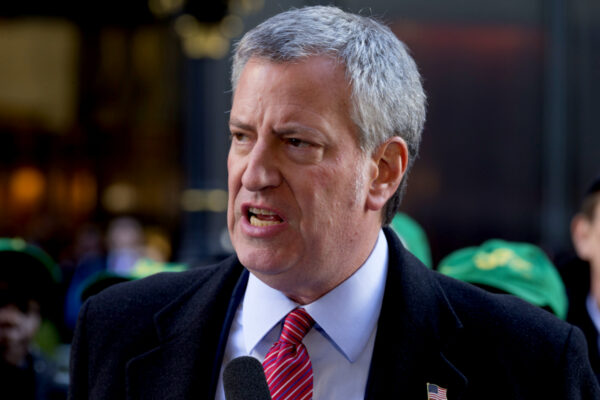 Want to know what a city with a defunded police department looks like? Just ask Democrat New York City Mayor Bill de Blasio, who boasted the Big Apple had a “peaceful” Labor Day weekend. It appears a peaceful weekend to the Democrat involves nearly a dozen people being shot, with one incident victimizing a six-year-old boy.

Early this year, Mayor de Blasio conceded to activists and slashed the NYPD budget by $1 billion. Since that cut, crime has been on the rise. In the last week alone, gun arrests in the city reached a 25-year high. But remember, it was a peaceful weekend.

Over the Labor Day weekend, a mother, her 6-year-old son, and three others were shot when they attended a Caribbean street celebration. The police are still investigating the matter to find out what the motive was behind the attack.

Another shooting took place on Monday when a man named Michael Scully was murdered while walking his dogs. Neighbors interviewed recall Scully as being a peaceful man and a close friend.

When talking to reporters, de Blasio said, “Thank God none have life-threatening injuries. Except for that incident, overwhelmingly we had a peaceful weekend in central Brooklyn and it really is because of the hard work of everyone.”

The mayor’s comments quickly drew backlash from the media as de Blasio snapped at reporters, claiming he was only talking about “central Brooklyn.” As for numerous other crimes de Blasio didn’t want to discuss, the mayor fell back on a proven technique for Democrats: pass the blame. That is exactly what de Blasio did when he said the spike in crime was a “perfect storm” caused by the coronavirus.

His exact words: “We had a long period of time where a huge percentage of the NYPD was out sick, we had the extraordinary additional burden placed on the NYPD by the coronavirus. I mean, come on, when I say perfect storm, I don’t use the phrase lightly. It’s been a health care crisis, an employment crisis, schools shut down. The very fabric of our society just torn apart by this horrible disease. It’s not surprising that’s there some comeback that’s needed.”

Apparently, on top of being categorized as a pandemic, the Democrats now believe the coronavirus has the ability to raise crime. There is no way it has anything to do with the $1 billion budget cut.

This piece was written by Jeremy Porter on September 9, 2020. It originally appeared in DrewBerquist.com [1] and is used by permission.