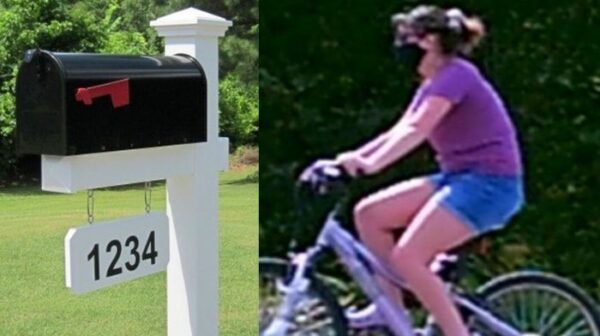 Given the fact that it is an election year, we’re all getting a lot of crap in our mailboxes. For some residents of Maine, however, this has become a literal problem!

The Hampden Police Department is on the hunt for a woman who has been committing some deranged acts of vandalism, according to WGME-TV [1]. Witnesses saw a masked woman dressed in purple, riding a purple bike, and wearing purple crocs on both Sunday and Monday leaving some disturbing surprises in the mailboxes of supporters of President Donald Trump.

Police say that the woman would stop at homes that had pro-Trump signs in their yards, and leave dog feces in their mailboxes.

“She has been picking up dog feces and putting it in mailboxes, specifically of people who have Trump signs outside and she has been also defacing Trump signs, writing comments on the signs,”explained Alyshia Canwell, a Hampden Public Safety patrol officer.

Anyone with any information on the identity of the woman has been asked to contact the Hampden Police Department, as defacing political advertising and vandalism are crimes.

“I am so over all this crap, no pun intended,” one local resident commented [5], with another joking, “Do not approach this lady she is armed … and she is dangerous.”

Sadly, this situation is not unique to Maine, as it is happening all over America. The mainstream media tries to make it look like Trump supporters are the deranged lunatics in this nation, yet they are the ones constantly being targeted by crazy leftists.

The vandalism of Trump signs has gotten so bad in Fond Du Lac, Wisconsin on both sides of the aisle have decided that “enough is enough,” according to the Fond Du Lac Reporter [6]. Republican Chair Rohn Bishop and Democratic Chair Joseph Lavrenz came together to issue a joint statement condemning the vandalism and theft of political signs.

“Destruction of political signs is not only wrong it is against the law,” the statement said. “A political yard sign expresses an opinion and that needs to be respected.”

“Candidates and campaign volunteers put money, time and effort into our democratic process during an election cycle. People need to respect that effort and leave the yard signs alone,” it continued. “Democracy rests upon participation and free expression, it should not be interfered with by the lawless actions of some.”