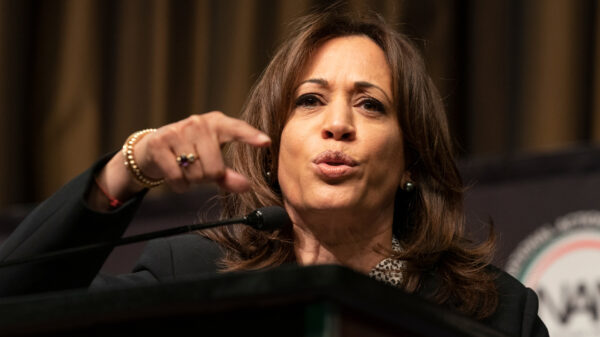 Kamala Harris, the Democratic nominee for vice president, just spoke out to praise the “brilliance” of Black Lives Matter, and to describe the continuing nationwide protests “as an essential component of evolution in our country.”

While participating in a virtual convention for the National Association for the Advancement of Colored People on Friday, Harris said that Black Lives Matter is the “most significant agent for change within the criminal justice system.”

“I actually believe, as a former prosecutor, that Black Lives Matter has been the most significant agent for change within the criminal justice system, because it has been a counterforce to the force within the system that is so grounded in status quo and in its own traditions, many of which have been harmful and have been discriminatory in the way that they’ve been enforced,” the running mate of Joe Biden added.

“I always, I’m going to interpret these protests as an essential component of evolution in our country, as an essential component, a mark of a real democracy and as necessary, as necessary,” Harris said. “The people’s voices must be heard. It is often the people who must speak to get their government to do what it is supposed to do, but may not do naturally unless the people speak loudly, and obviously peacefully, but speak loudly.”

Harris was then asked about the founders of the Black Lives Matter organization — Patrisse Cullors, Alicia Garza, and Opal Tometi — being named to TIME [1]‘s 100 most influential people of 2020 list.

“Good for TIME magazine for doing that,” Harris replied.

It should be noted that back in 2015, Cullors admitted that she and the other founders of Black Lives Matter are “trained Marxists [2].”

“Myself and Alicia in particular are trained organizers. We are trained Marxists,” Cullors said. “We are super-versed on, sort of, ideological theories.”