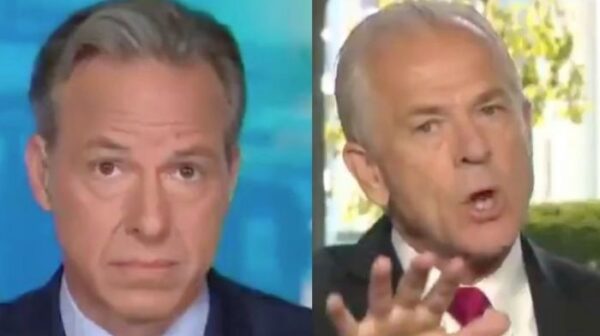 Jake Tapper just had an interview with White House trade adviser Peter Navarro go off the rails on Sunday, with the official in Donald Trump’s administration accusing CNN of lying to Americans.

While appearing on “State of the Union,” Navarro accused Tapper and CNN of not being honest with the American people.

“Let’s [talk about] revelations from Bob Woodward’s book. … I want you to take a listen to what President Trump told Woodward in private on Feb. 7,” Tapper said, referring to a clip in which the president talked to Woodward about coronavirus.

“He’s stating that the coronavirus is five times deadlier than the regular influenza,” Tapper said of the president’s comments. “Now here’s what [the president] was saying publicly two weeks later.”

He then played another clip of Trump telling Dr. Sanjay Gupta, CNN’s senior medical correspondent, “The flu is much higher than that,” referring to a fatality ratio when compared to coronavirus infections.

“He was misleading the American people,” Tapper said. “Why?”

Navarro, however, was not having any of it.

“Give me a minute to walk through the timeline, because I think this is really important,” Navarro replied. “On Jan. 31, that was basically the starting gun to fight this virus that came in from the Chinese Communist Party. Let’s not forget where this started. And that was a signal from this president that this is a serious, serious matter. He’s taking down flights from China. He was called a xenophobe and a racist by Joe Biden, who later had to apologize.”

Tapper interrupted to claim that Biden never said that about Trump and never apologized, but Navarro did not stop there.

“So, Jan. 31, pulls down the flights, saves probably hundreds of thousands of American lives. … In that first week of February, leading up to Feb. 7, we here at the White House started a strategy,” he said. “It basically was, hope for the best, prepare for the worst, stay calm, and begin to attack this virus from China on four different vectors. PPE, therapeutics, vaccines.”

“I’m not giving you 10 minutes to do this,” Tapper warned, indicating that he was already preparing to cut the interview short.

“What happens on Feb. 9?” Navarro added. “This is the most important thing. A memo — I write a memo that goes out to the task force here that basically outlines President Trump’s strategy for dealing with the virus. And, in this memo, it brings to the effect that we need N95 masks.”

The situation escalated when Tapper repeatedly tried to interrupt him in the next few minutes.

“This is not fair, Jake,” Navarro said. “You’re constantly interrupting me and you’re not letting me talk. … You just don’t like the answer!”

Tapper continued to accuse the Trump advisor of lying before insisting, “You’re not answering the question,”

That’s when Navarro lost his temper.

Navarro to Tapper: “You just don’t want to listen… CNN is not honest with the American people.”