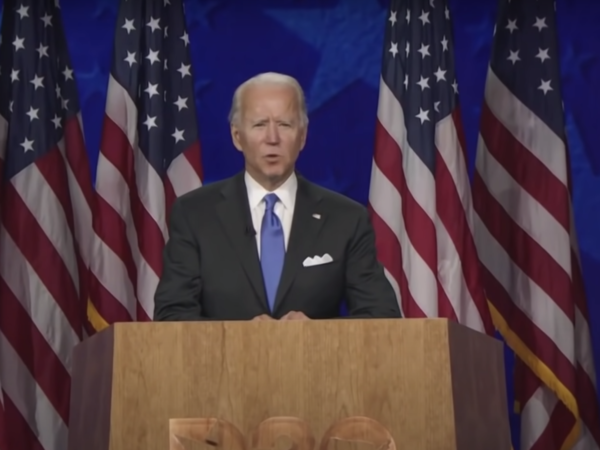 Political parties aside, it is downright frightening that the Democrats would select Joe Biden as their presidential nominee. His history alone should be enough to prove he has no business in politics. Close friends of his even consider the best years of Biden to be behind him, yet here he is – promising to fight for the soul of America. Interesting Biden would mention fighting when he can’t even do simple math as he fumbled fake COVID-19 numbers in front of potential voters.

Speaking in Philadelphia, Joe Biden appeared dazed and half asleep as he tried to read the teleprompter just feet in front of him. What was meant to be the ending remarks to a speech that would unify a nation crumbled as Biden said, “It’s estimated that 200 million people will die, probably by the time I finish this talk.”

Joe Biden: “It’s estimated that 200 million people will die, probably by the time I finish this talk.”

For those wondering, 200 million people are roughly two-thirds of the nation. What Biden meant to say was 200,000 people would die. Still, the presidential hopeful didn’t stop or correct himself as he just continued to read whatever was on the teleprompter. Colleagues close to Biden were quick to blame the teleprompter for the mistake, but couldn’t a man wanting to become the next POTUS notice such a causal mistake? Today it is just numbers, tomorrow it could be something as serious as intelligence codes.

While the mistake might not put people’s lives in danger, it should make people question who they are voting for in the upcoming election. No matter which side of the aisle, Biden is in over his head and not the right choice for president. Don’t take my word for it, just listen to Barrack Obama’s former Secretary of Defense Robert Gates. He once said Biden had, “been wrong on nearly every major foreign policy and national security issue over the past four decades.”

But why does Robert Gates matter? He has spent the most time which both President Obama and Biden. He knew both and would constantly make comments about their difference. In other words, Gates is known for being a straight shooter. In a recent interview, Gates discussed the weight of being president and the problems it can have on someone in the elder years.

Gates told Real Clear Politics, “I think I’m pretty busy and pretty active but I think– I think having a President who is somebody our age or older, in the case of Senator Sanders, is- I think it’s problematic. I think that you don’t have the kind of energy that I think is required to be President. I think– I’m not sure you have the intellectual acuity that you might have had in your sixties. So, I mean it’s just a personal view. For me, the thought of taking on those responsibilities at this point in my life would be pretty daunting.

With the first debate days away and no teleprompter, Joe Biden will have his first true test and what it means to become president. While many have taken on President Trump, not even the Democrat’s ace Hillary Clinton could best the movement that is MAGA.

This piece was written by Jeremy Porter on September 21, 2020. It originally appeared in DrewBerquist.com [3] and is used by permission.