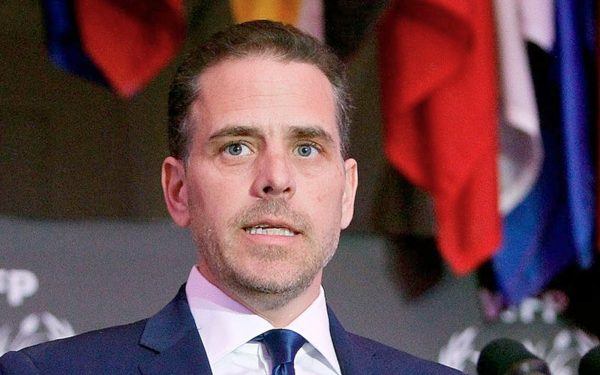 A bombshell report reveals questionable financial transactions between Hunter Biden and his associates involving his role on the Board of the Ukrainian natural gas firm Burisma Holdings.

Biden, the son of Democrat presidential nominee Joe Biden, engaged in “extensive and complex financial transactions” that were thoroughly analyzed by the Senate Homeland Security and Finance Committees.

It states that Hunter “formed significant and consistent financial relationships” with Mykola Zlochevsky, the founder of Burisma.

Additionally, Biden and his business partner Devon Archer’s firms “made millions of dollars from that association” while his father served as vice president.

The Senate and Finance committees claim that they have obtained records from the US Treasury Department.

Those records reportedly “show potential criminal activity relating to transactions among and between Hunter Biden, his family, and his associates with Ukrainian, Russian, Kazakh and Chinese nationals.”

OUT TODAY: Report with @chuckgrassley [1] found millions of dollars in questionable financial transactions between Hunter Biden & his associates and foreign individuals, including the wife of the former mayor of Moscow. https://t.co/R1MxQ4xGKP [2]

“This isn’t just another story about a politician’s kid getting rich,” Schweizer said.

Wow, big news. Pick it up Lamestream Media, and pick it up BIG! https://t.co/5wYjyYsRfO [4]

The Senate Homeland Security and Finance Committee’s address concerns that Biden had contacts with individuals linked to the Chinese military.

“During the Obama administration, the Committee on Foreign Investment in the United States (CFIUS) approved a transaction that gave control over Henniges, an American maker of antivibration technologies with military applications, to a Chinese government-owned aviation company and a China-based investment firm with established ties to the Chinese government.”

One of the companies involved in the transaction was a private investment fund called Bohai Harvest RST (BHR), where the son of the Democrat nominee for President was a board member.

Schweizer claimed that he had information [6] suggesting the Bidens cooperated with Chinese partners to bypass certain laws.

By extension, this allowed them to acquire companies that helped the Chinese military excel in technology.

Biden and Obama’s Conflict of Interest

The report goes on to suggest that the Obama administration “ignored the glaring warning signs” when Biden’s son joined the board of Burisma.

Officials “knew” that Hunter’s position on the board was “problematic.”

His “position on the board created an immediate potential conflict of interest that would prove to be problematic for both U.S. and Ukrainian officials and would affect the implementation of Ukraine policy,” according to the report.

When asked earlier this year how his role as Vice President and his son’s dealing in Ukraine were not a conflict of interest, Joe Biden became enraged.

“Let’s focus on the problem,” he yelled, avoiding the question. “Focus on this man, what he’s doing, that no president has ever done. No president!”

WATCH: @JoeBiden [10] says there was no conflict of interest for his role as head of US policy in Ukraine & his son’s job in Ukraine. He tells me, “Focus on this man and what he is doing.” @CBSNews [11] pic.twitter.com/NcJe0qsjlH [12]

The media ‘focused’ on any mundane transaction involving Russia rather intently over the last few years.

Why wouldn’t they be just as interested that Biden’s financial transactions, according to this latest news, include a $3.5 million wire transfer from Elena Baturina, the wife of the former mayor of Moscow?

Republican strategist Andrew Surabian openly wondered if the media would be handling this explosive report a little differently if it had involved President Trump’s son.

Can anyone in the media honestly deny that if this were Don Jr. instead of Hunter Biden that it would be the lead story on CNN right now and the front page of The New York Times and Washington Post? https://t.co/LzwDDF3TFV [14]

Joe Biden spokesman Andrew Bates has been trying his best to divert attention from the news about Hunter’s financial transactions.

“Ron Johnson has wasted months diverting the Senate Homeland Security & Governmental Affairs Committee away from any oversight of the catastrophically botched federal response to the pandemic,” Bates told the New York Post [16].

Odd, Democrats weren’t concerned about attention and resources being diverted away from the pandemic when they were conducting their impeachment sham.

Read more at ThePoliticalInsider.com:
FBI Agent Who Discovered Hillary’s Emails On Anthony Weiner’s Laptop Claims He Was Told to Erase His Own Computer [18]
President Trump: If Dems Use Impeachment To Block Supreme Court Nomination, “We Win” [19]
Pelosi on Filling the SCOTUS Seat: Republicans Are ‘Coming After Your Children’ [20]