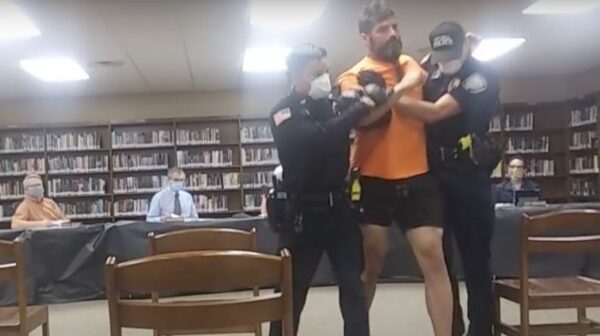 Chilling video footage is going viral this week showing police physically drag a South Dakota man out of a school board meeting about mask mandates for not wearing a mask.

One of the main topics of the meeting was local opposition to the school district’s mask mandate, according to the Mitchell Republic [1]. The man who was dragged out has been identified as Reed Bender, a local resident who has spoken out against mask mandates in the past.

During the meeting, Bender refused to wear a mask, even when district officials offered to provide him with one. When he continued to refuse to comply with their demands, Superintendent Joe Graves called the police.

Officers arrived on the scene about twenty minutes later and they proceeded to try to convince Bender to wear a mask, but he still refused. That’s when the cops began trying to physically remove him from the library.

Bender, however, was not going down without a fight. He resisted the officers as other attendees begged him to comply, fearing how the situation could escalate. One officer even pulled out a taser at one point in the confrontation, indicating that he was ready to use it to subdue the man.

“You’re not going to tase me in front of all these people,” Bender exclaimed. “I want people to video this while their cops, of minority descent, have to do this to everybody.”

Though Bender resisted a little more after that, the cops were finally able to get him out of the library.

“Never in my entire career as a superintendent have I had that happen before,” Graves said. “The board said there is a masking mandate and everyone in the school building must wear a mask. We gave the gentleman fair warning of that and offered him a mask. He refused, so the board had to enforce the mandate.”

The Mitchell Police Division said that while Bender has yet to be charged, the incident is still being investigated at this time. Though Bender is one of many local residents who are against the mask mandate, the school district is intent on seeing it through.

“A survey wouldn’t change my mind, the medical professionals have recommended (masks), and my wife cares for and has treated several patients who have had COVID-19,” said board member Kevin Kenkel. “She has seen the long-term effects on people. Even if 75% said we don’t want masks, I would still vote in favor of masks.”