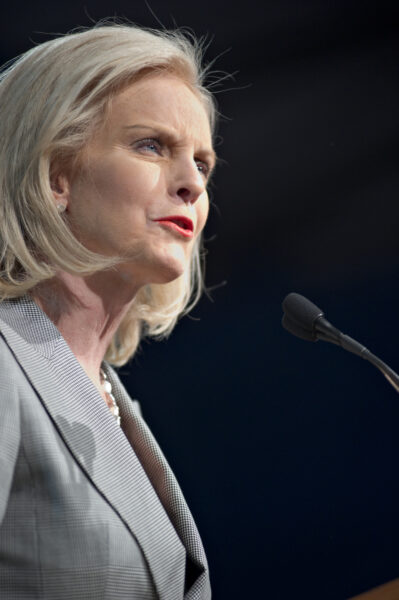 McCain says [1] the decision came in the wake of President Trump’s alleged remarks [2] about U.S. services members reported by The Atlantic.

Democratic presidential nominee Biden said during a fundraiser, “Maybe I shouldn’t say it but I’m about to go on one of these Zooms with John McCain’s wife, who is — first time ever — is endorsing me because of what he talks about with my son and John’s who are heroes, who served their country, you know he said they’re losers, they’re suckers.”

Cindy McCain is planning to actively help Joe Biden by participating in virtual campaign events and joining him when he appears in Arizona.https://t.co/8e8qKeWIrA [3]

Trump Refuted Charges By The Atlantic That He Insulted War Dead

According to The Atlantic, Trump called WWI U.S. soldiers buried in France “losers,” though the White House fully denies this happened.

“The Atlantic Magazine is dying, like most magazines, so they make up a fake story in order to gain some relevance. Story already refuted, but this is what we are up against. Just like the Fake Dossier,” Trump tweeted in early September after The Atlantic story was published.

The Atlantic Magazine is dying, like most magazines, so they make up a fake story in order to gain some relevance. Story already refuted, but this is what we are up against. Just like the Fake Dossier. You fight and and fight, and then people realize it was a total fraud!

After the Atlantic article – using four anonymous sources – was published at least 21 officials [2] have denied Trump said any such thing.

Before Her Endorsement, Cindy McCain Praised Biden In DNC Video

John McCain’s widow praised Biden in a video during the Democratic National Convention.

“It was a friendship that shouldn’t have worked,” she said describing the relationship between her late Republican husband and the former Democratic vice president.

Cindy McCain’s video at the Democratic national convention was part of a theme that week of Democrats trying to show they have support from some Republicans, including high profile GOP members.

My husband John lived by a code: country first. We are Republicans, yes, but Americans foremost. There's only one candidate in this race who stands up for our values as a nation, and that is @JoeBiden [6].

Cindy McCain, along with her daughter Meghan of “The View” fame, have often been critical of President Trump.

The Biden and McCain families overall have also been longtime friends.

During an appearance on “The View” after John McCain had been diagnosed with cancer, Biden once consoled Meghan [8].

Biden lost his own son Beau in 2015 to the same cancer that took John McCain’s life.

This piece originally appeared in ThePoliticalInsider.com [9] and is used by permission.

Read more at ThePoliticalInsider.com:
FBI Agent Who Discovered Hillary’s Emails On Anthony Weiner’s Laptop Claims He Was Told to Erase His Own Computer [10]
President Trump: If Dems Use Impeachment To Block Supreme Court Nomination, “We Win” [11]
Pelosi on Filling the SCOTUS Seat: Republicans Are ‘Coming After Your Children’ [12]