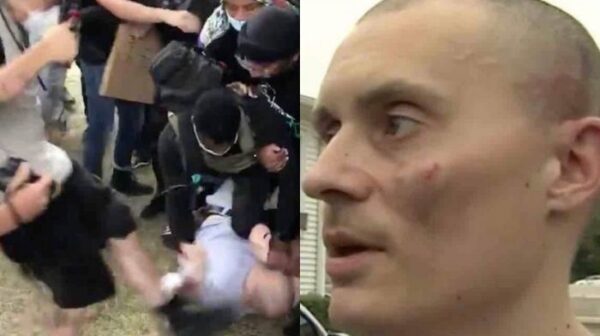 Despite the fact that the media has been trying to make it look like things were “mostly peaceful” in Kenosha, Wisconsin when President Donald Trump visited on Tuesday, video footage spreading online is showing that things were really not “peaceful” at all.

A chilling video is going viral showing the moment a Trump supporter was kicked in the head by a Black Lives Matter militant as the conservative was laying on the ground, flat on his back.

Trump supporter gets into a fight with a few Black lives matter supporters but many shielded him from other protesters pic.twitter.com/NPxyT8dbGD [1]

More of the altercation. The man was lead away without further incident pic.twitter.com/bdH6kkyepG [3]

The victim of this attack, identified only as David, later told WDJT-TV [5] that he was left with a badly swollen cheekbone and bruised temple.

“I was attacked by numerous people at the same time,” he said, adding that the beatdown started over his Trump hat.

David went on to say that he got a “kick to the head, one really good blow to the face. They surrounded me and attacked me and started chanting things. They were completely out of control.”

The media outlet reported that the crowd of liberal rioters chased David down the street, a scene that also played out at other points throughout the day.

“People came out to stand up,” said anti-Trump protester Lou Downey. “Stand up against Trump in the face of all the violence he’s been unleashing around the country.”

Kicking vulnerable people in the head has become a favorite pastime of sorts for radical leftists. Back in June, a 14-year-old boy was charged with second degree assault after a viral video captured him kicking a man in the head; similar to David, he was already face-down in the street.

That thug who kicked man in head after he was already knocked out during protest? Police made an arrest — and suspect is only 14. https://t.co/6xOi1SVxi7 [6] pic.twitter.com/7okMIbYWWL [7]

A similar video from Portland made the rounds last month. It resulted in 25-year-old Marquise Lee Love being arrested [9] on charges of riot, coercion, and second-degree assault.

Leftist thug in 'security' vest kicks man in head from behind, knocking him out, after Portland militants beat him, force him to sit in street after truck crash https://t.co/Qm32ZyZjz9 [10]

So much for the so-called “peaceful” and “tolerant” Left, eh?