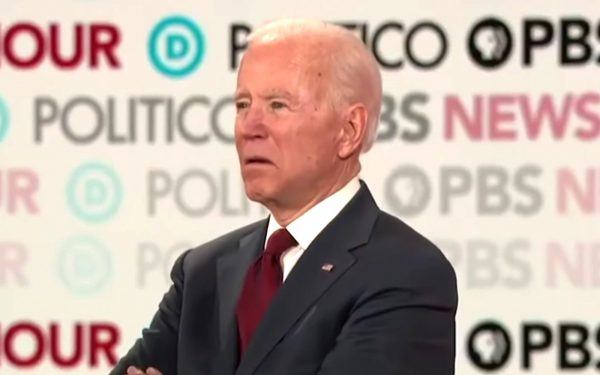 The Biden campaign and the Trump campaign both had previously agreed to an earpiece check before the debate. But late on Tuesday Biden reneged. The fallout has been immediate. Will the debate go on as scheduled?

If Joe Biden isn't hiding anything why won't he consent to a third party checking for an earpiece before tonight's debate?

Biden has been known to use earpieces before. It is rumored he had answers fed to him through earpieces during the Democrat primary debates. That would explain his numerous gaffes, as he couldn’t process and then repeat all the info being fed to him. A system overload.

This last minute refusal for the check is perfect for Trump. Obviously Biden wants to use one or he wouldn’t have a problem with a check. Now, television cameras and photographers will be looking at Biden’s ears. Trump could call him out on it during the debate. Can you imagine the drama of that? I can feel a Hans Landa-like exclamation of joy coursing through my psyche.

If Trump goes there he could go for broke and also call Biden on pill use. Biden also refused a drug test. Both questions go right to the heart of the matter that the president has been highlighting for some time: Does Joe Biden have the mental acuity to fulfill the duties of the presidency?

And what if, knowing they cannot operate without the earpiece, Biden refuses to go on? That would be a disaster for him and his team cannot be contemplating it. Or, there is another possibility. The Biden team is flying Ironhand.

Ironhand is a Vietnam War naval aviation term that described a mission where one aircraft acted as SAM bait to get a SAM station to turn on its radar. Then, they dodged the SAMs and blew up the SAM station with Shrike missiles. In politics it means intentionally setting up a bad situation for yourself as bait for the other campaign to take. All the while you know the charge against you is false because you made it up. When the other sides goes for it and is proved wrong, you call them at their previous idiocy and execute false indignation, i.e.- blast them with your Shrikes. That may not be the case. If it isn’t, then Biden will have some serious explaining to do Tuesday night to Donald Trump and the American people.