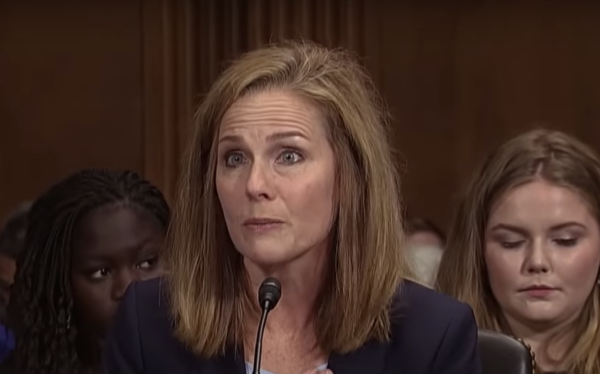 Supreme Court nominee Judge Amy Coney Barrett is undergoing a crucible of hate and bile directed against her by the Left and their media sock puppets. This week Barrett had to take it from Newsweek.

Barrett’s nomination to the Supreme Court will be announced Saturday morning at the White House.

Barrett is a pious Catholic. But the publication mistakenly described her (as previous incorrect profiles have) as an acolyte of the group “People of Praise”, “a charismatic Christian parachurch organization, which was founded in South Bend, Indiana in 1971. It teaches that men have authority over their wives. Members swear a lifelong oath of loyalty to one another and are expected to donate at least 5 percent of their earnings to the group.”

Newsweek went further and tied the group to Margaret Atwood’s novel, “The Handmaid’s Tale,” “where women’s bodies are governed and treated as the property of the state under a theocratic regime.” In its hysteria, the leftist rag tied the novel to the wrong group and Barrett to the wrong group in the first place. Its correction: “This article’s headline originally stated that People of Praise inspired ‘The Handmaid’s Tale’. The book’s author, Margaret Atwood, has never specifically mentioned the group as being the inspiration for her work. A New Yorker profile of the author from 2017 mentions a newspaper clipping as part of her research for the book of a different charismatic Catholic group, People of Hope. Newsweek regrets the error.” Not a word about Barrett in the correction.

Conservative National Review is saying, “the attacks over the last few days have been steeped in anti-Catholicism, other types of bigotry, and lazy error.” But then, to idiots of all shades Catholicism is the religion they’re still allowed to hate.

The leftist site Refinery 29 said Barrett was “the Potential RBG Replacement Who Hates Your Uterus.” Barrett and her husband have seven kids, including one carried to term after learning he would have Down’s Syndrome, and two adopted from Haiti. There goes that argument.

Is she a scary threat to Roe v. Wade? The New York Times reported in 2016, Barrett “said that the core holding of Roe v. Wade was that women had the right to an abortion, and that was not likely to change in the future, but how states restrict abortion might. ‘I think the question of whether people can get very late-term abortions, you know, how many restrictions can be put on clinics, I think that would change,’ she said.” Quite judicious.

Barrett clerked for Antonin Scalia and has perfect legal creds. But liberal California Democrat Senator Dianne Feinstein cited her Catholicism as giving many Democrats “this very uncomfortable feeling,” adding: “The conclusion one draws is that the dogma lives loudly within you.” My God. Imagine if that was said about the faith of a Jewish or Muslim nominee? The Democrats would go ape. But, it’s okay to do it to a Catholic.

Amy Coney Barrett graduated first in her class from Notre Dame Law. When she returned as a professor, she was awarded distinguished professor of the year 3 times.

But Senator Feinstein would have you believe Barrett is unqualified because she takes her Catholic Faith seriously.

As a matter of contrast, Georgetown Law Professor Jonathan Turley writes in The Hill that “the late Justice Ruth Bader Ginsburg also was religious. She publicly declared: ‘I am a judge, born, raised and proud of being a Jew. The demand for justice, for peace and for enlightenment runs through the entirety of Jewish history and Jewish tradition.’ She noted that she was the only justice to have a mezuzah affixed to her office door…Ginsburg regularly studied and attended conferences on Jewish religious law. She often discussed how she insisted the traditional certificates reading ‘the year of our Lord’ be changed as unacceptable for Jewish lawyers. She was right, of course, but her references to faith did not make her a religious zealot.”

Exactly. It is sad the same religious tolerance is not extended by Feinstein and the Democrats to a Catholic. Just like the Know Nothings of the 19th century and the Klu Klux Klan of the 19th and 20th centuries, those who spout this kind of moronic anti-Catholicism show themselves to be sick in the soul and not worthy of consideration as serious adults. That they sit in Congress or in a high position in the media is a moral indictment of those who put them there.

So we begin this fight in earnest on Saturday. Strap yourself in.