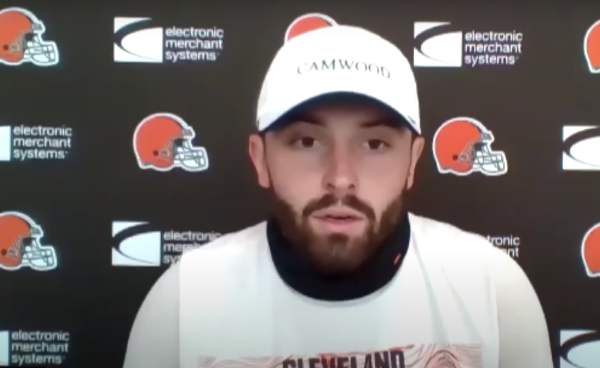 The Cleveland Browns made the news this weekend, but it wasn’t for beating the Ravens as they struggled to only score six points the entire game. No, Baker Mayfield, the Brown’s quarterback, struck a chord among fans when he decided NOT to kneel during the national anthem after saying he would.

Days before, Mayfield told reporters he was planning on kneeling along with his teammates. He said, “You know, right is right and wrong is wrong. It’s a human rights issue. It’s been going on for a long time and I believe in that.” Yet when the time came, Mayfield remained to stand, although no one was shocked as he expressed his feeling on social media.

On Saturday, Mayfield released a statement explaining that he was retracting his previous statement and would not be kneeling for the game against Baltimore. The sudden change of heart supposedly came after watching how other NFL teams handled peaceful protests at their first games.

Mayfield’s post reads, “Also after reading many letters and messages over the past weeks… I have been showed that a gesture such as kneeling will only create more division or discussion about the gesture, rather than be a solution towards our country’s problems at hand. With that being said, I am choosing to stand for both anthems to show respect, love, and unity to everybody involved. I will respect all of my teammates no matter their decision. We have had meaningful discussions on what true change looks like, and that change takes all of us being together. I am posting this now so it is not a discussion on game day. And so the discussion can continue to be about how to better our country, instead of divide us. Our team is ready to fight for our goals both on and off the field.”

Come game day, fans appeared more worried about their struggling offense as the Ravens gained 38 points on an oblivious Brown’s defense. Although fans respected Mayfield’s decision to stand, many couldn’t help but criticize the quarterback when he was shown joking and laughing during the national anthem.

While it remains unclear what Mayfield and his teammates were laughing about, they were certainly quiet when the clock hit zero in the fourth.

This piece was written by Jeremy Porter on September 15, 2020. It originally appeared in DrewBerquist.com [1] and is used by permission.

Read more at DrewBerquist.com:
Scare Tactics at a Time of COVID: Did They Really Just Try to ‘Cancel’ Halloween?   [2]
Florida Residents Call For Restaurant Boycott After Senator Kamala Harris Has Lunch [3]
Pelosi incoherently stumbles through attempted attack on Trump for peace deal between Israel and Bahrain [4]