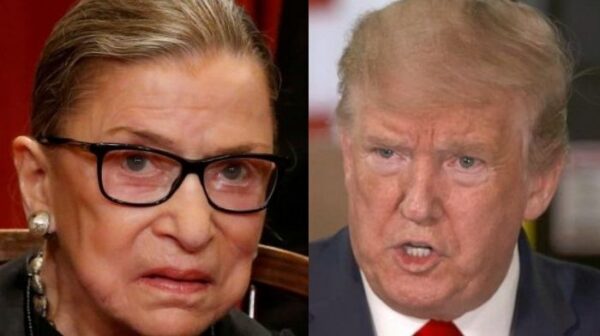 President Trump paid his respects to the late Supreme Court Justice Ruth Bader Ginsburg Thursday, but was met with protesters who booed and chanted “vote him out.”

The President, joined by his wife, First Lady Melania Trump, and sporting a mask, stood silently before [1] Ginsburg’s flag-draped coffin for a few minutes.

The crowd below abandoned decorum and began booing Trump.

Many individuals even began chants of “vote him out,” a scene which some might view as a particularly tacky display in the presence of a revered figure such as Ginsburg and the President of the United States.

‘VOTE HIM OUT!’ President Trump booed during visit to RBG’s casket

Trump Paid Respects to Ginsburg, The Protesters Disgraced Her Honor

Another chant began after the voting decree, with protesters repeatedly shouting [4] “honor her wish.”

Her wish, as reported by NPR [5], was dictated in a statement to Ginsburg’s granddaughter, Clara Spera.

“My most fervent wish is that I will not be replaced until a new president is installed,” she reportedly said.

(Ginsburg had previously stated in 2016, however, that the President has the power to choose a nominee [6] even in an election year.)

“The president is elected for four years not three years, so the power he has in year three continues into year four,” she said to a group of law students at Georgetown University in 2016.

President Trump has been incredibly respectful since learning of the passing of Justice Ginsburg.

Video of his initial reaction shows a man who appeared to be deeply moved by the news of Ginsburg’s passing.

“She led an amazing life, what else can you say? She was an amazing woman,” Trump remarked.

“Whether you agreed or not she was an amazing woman, who led an amazing life.”

Former MSNBC host Chris Matthews, no fan of the President, praised Trump for his respectful response.

Journalists and other anti-Trump figures attacked Matthews’ comment, giving the impression that is never okay to compliment President Trump.

What’s wrong with you? He called her dying wish a lie.

This morning he … floated a baseless conspiracy theory … about her dying wish. https://t.co/WOUrfKDefJ [14]

He said her dying wish is a forgery on national television today https://t.co/idLAV2GHj9 [16]

any chance you saw the news this morning?

The President has held off on nominating somebody for the vacant seat, instead opting to do so after Ginsburg’s memorial ceremonies have been completed.

Ginsburg’s casket is scheduled to be transported to the National Statuary Hall of the United States Capitol on Friday, where she will lie in state.

Read more at ThePoliticalInsider.com:
President Trump: If Dems Use Impeachment To Block Supreme Court Nomination, “We Win” [22]
Pelosi on Filling the SCOTUS Seat: Republicans Are ‘Coming After Your Children’ [23]
Ruth Bader Ginsburg’s Daughter Claims She Didn’t Retire Because She Wanted Hillary To Name Successor [24]