70-year-old college mural removed for being ‘too white’

While mainstream media continues to cover riots across America, cancel culture is quietly slithering through our history, determined to forget the past. The latest victim of the growing cancel culture is a 70-year-old mural at the University of Rhode Island (URI) that students claim is “too white.”

The mural pictured below depicts students piling into a car, service members returning home, a URI commencement speech, and a beach scene. 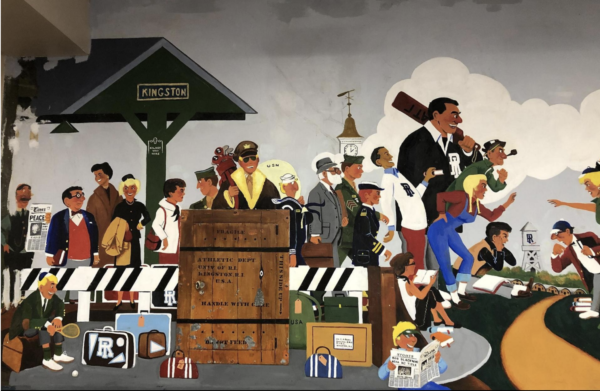 The vice president of student affairs, Kathy Collins sat down with WJAR-TV to discuss why the mural has been plastered over with a generic URI banner. Her response, “I have received complaints about the murals that [they] portray a very homogeneous population…the persons painted and depicted on the wall are predominantly white, and that does not represent who our institution is today. Some of our students have even shared with us they didn’t feel comfortable sitting in that space.”

Collins went on to add, “I think we have to recognize the horrible incidents [involving] George Floyd, Breonna Taylor, and most recently Jacob Blake in Kenosha, Wisconsin, during this…heightened time, and we as an institution have to look at the systems in place across this institution that maybe are not representing who we are today and representing the true diversity of URI today.”

The university was quick to make a safe environment for all its students, but none thought to look up the history of the mural. What were the artist’s intentions when painting the mural featured above? They could have just asked him.

Now 95 years old, Arthur “Art” Sherman recalled being commissioned to paint the mural. He was not only a student of the 1950s class, a decorated World War II veteran, but he would later become a professor of physical education at…the University of Rhode Island.

When asked the motive behind the murals, Sherman laughed: “Well, it depicted that era. A lot of students, friends of mine, would come by and say, ‘Why don’t you do this, why don’t you do that?’ So, that’s what I did, so everybody chipped in.”

Collins noted photographs were taken of the mural before being replaced, and they will always celebrate and recognize the work of Arthur Sherman.

This piece was written by Jeremy Porter on September 12, 2020. It originally appeared in DrewBerquist.com and is used by permission.